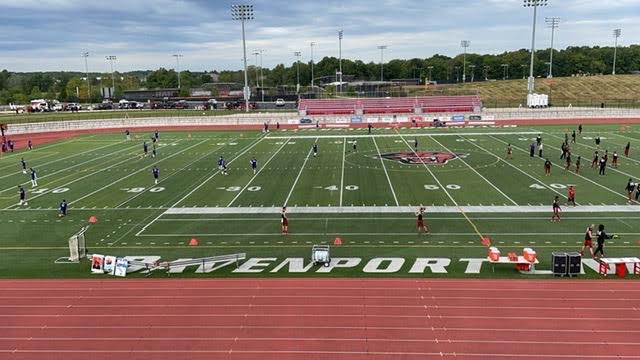 Cody Schrader rushed for 217 yards and scored four touchdowns to lead Truman State to a 31-14 season-opening victory over Davenport in Caledonia, Michigan Saturday. Schrader capped a 12-play drive to start the game with an eight yard run on fourth down. The Panthers tied the game with the first of two Deondre Ford to Roy Livingstone touchdown passes with two minutes left in the first half. On the ensuing kickoff, Jaylin Jefferson set up the Bulldogs in the red zone with an 81 yard return. Schrader scored on a one yard plunge with 24 seconds left to make the score 14-7 at the half.

Schrader extended the lead early in the third….

Brad Boyer with the call on Superstation KRES and centralmoinfo.com. A second Ford-Livingstone connection made it 21-14 on the next Panthers’ possession. It stayed that way until just over six minutes left in the game when Josh Scheiderer hit a 42 yard field goal to make it a two possession game. Schrader’s longest run of the day, a 40 yard scamper, set up his three yard TD run with 2:34 left.

With the win, Nesbitt tied Don Faurot for second place on the Truman career victory list with 63. Nesbitt reacted to having his name next to the legendary Mizzou coach….

It was Nesbitt’s first win in Michigan in six tries. The Bulldogs will try to make it two in a row when they come back to Michigan next Saturday to play Wayne State in Detroit. We will have the game on KRES starting at 11:15am.