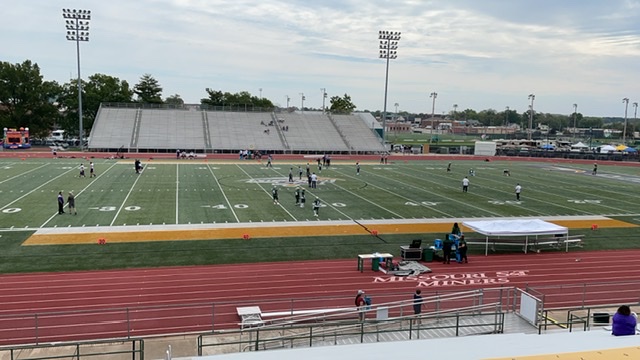 Cody Schrader ran for 278 yards and three touchdowns to lead Truman State to a 38-21 victory over Missouri S&T in Rolla Saturday. The sophomore running back didn’t waste anytime making an impact on the game.

Brad Boyer with the call on Superstation KRES and centralmoinfo.com. A Nolan Hair seven-yard touchdown pass to Tate Crane capped the next possession. After the Miners cut the lead to 14-7 on their next drive, Schrader was off to the races again.

It was 21-7 Truman after one and the only score of the second quarter was a Josh Scheiderer 30-yard field goal. Midway through the third quarter, the ‘Dogs defense extended the lead.

Truman picked off three passes and recovered a fumble, while the Bulldog offense didn’t commit a turnover. Coach Gregg Nesbitt…

Schrader’s last burst was from 61 yards out to make the score 38-7. He finished 28 yards shy of the single game record while not playing the fourth quarter. Schrader’s total was the fifth highest in Truman history and pushed him over 1,000 yards for the season (1,044). Ben Watson had a fumble recovery, an interception, and a sack. Coach Nesbitt saluted Ben Thomas for holding Breon Michel to three catches for 39 yards. The Miners receiver came into the game second in the country in receiving touchdowns and yards.

Nesbitt’s Bulldogs improve to 5-1 and 1-1 in the conference. Truman will play at Southwest Baptist next Saturday. Coverage on KRES will begin at 12:15. S&T drops to 2-4 and 0-2 in the league. You can hear the full postgame interview with coach Nesbitt with this story at centralmoinfo.com.