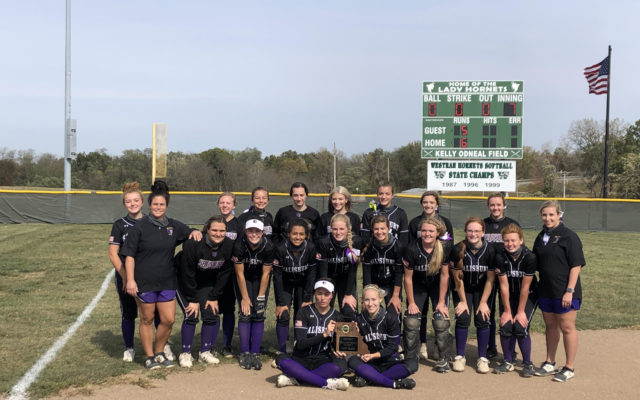 The defending Class 1 softball champions will continue their title defense. Salisbury defeated Cairo 6-5 to claim their seventh straight district title. Cairo took a 3-0 lead in the first inning with a three-run home run by Abi Ogle. The Lady Panthers answered in the third inning with a two-run double courtesy of pitcher Jaden Howard. Salisbury then took the lead for good in the fourth.

Lucas Smith with the call of the Khloe Wyatt triple on Glory 97 and centralmoinfo.com. Howard drove in another run to cap off a four-run fourth inning. While Howard shined offensively, it was her pitching which did the talking. The sophomore south paw struck out 15 Lady Cats, allowed seven hits, and walked three. Cairo coach Brian Winkler discusses how Howard kept the Lady Cat offense off balance.

Cairo’s other two runs came in the fifth inning after Ogle hit her second home run over the left-field foul pole. The Lady Cats finish the season 15-6. Salisbury coach Kathryn Bachtel reflects on another district championship.

The Lady Panthers will travel to Silex for their Class 1 sectional Wednesday. Bachtel says Salisbury will have to turn the page quickly.

19-6 Salisbury came into Saturday’s district title game not having to play a district semifinal game after both Glasgow and Higbee forfeited in the 4-5 matchup. You can hear Bachtel and Winkler’s full postgame interviews below: