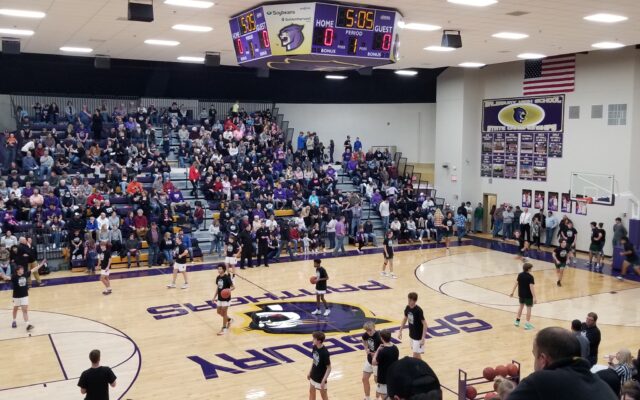 The boys edged out a 46-44 win. Westran had last possession.

Austin Ward with the call on 99.9 The Captain and centralmoinfo.com. Both teams went back-and-forth in fourth quarter.

The final frame had four ties and six lead changes. Salisbury coach Kenny Wyatt believed the difference was the defensive effort. After Westran’s Langden Kitchen scored 16 points in the first half, Wyatt’s Panthers held him to three points and no field goals in the second half.

Salisbury was led by Ethan Hamilton’s 13 points, Mason Stapleton recorded 12 and Cooper Francis put in 10. Westran starters Blake Williams and Ashden Dale picked up three first half fouls and the Hornets were without Trent Brandow and Marshall Kitchen. Coach Chris Sander said it required other kids to step up.

Jace Chapman had 17 points. Westran raced out to an 8-0 lead before the Panthers responded with a 16-6 run and led for nearly all of the second and third quarters. Salisbury moves to 14-2 and Westran falls to 15-3.

The Lady Panthers trailed by eight early in the fourth but closed the game on a 16-3 run to pull out a 53-48 victory.

Westran got 14 points from Dylan Perry, 12 from Kharigan Fuemmeler and Kate Hollman contributed 10. Coach Alex Thomas was happy with the effort.

10-6 Salisbury will meet 5-12 Westran again in the first round of the Sturgeon Tournament Monday.