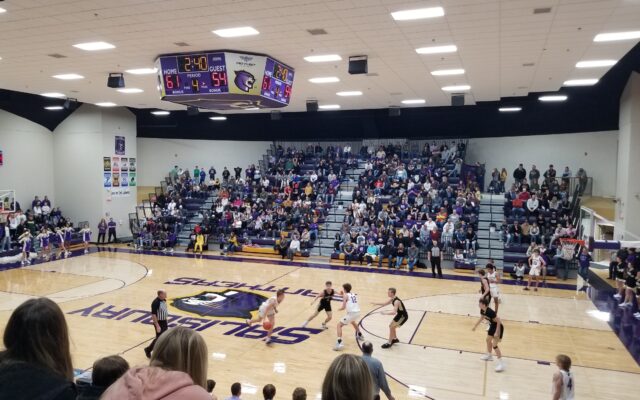 The Salisbury boys claimed their first championship at their home tournament while Meadville kept their unbeaten season going on their way to the girls’ championship.

In the boys’ title game, the Salisbury Panthers used a 12-0 run from the end of the first quarter to the start of the second quarter to help pull away from Cairo in a 70-60 victory. The Panthers held their largest lead at halftime at 37-23. The Bearcats cut the deficit back to four in the third quarter. The Panthers then responded with another run to end the quarter.

Colin Schowe with the call on Superstation KRES and centralmoinfo.com. Stapleton hit the free throw to complete the three-point play and the Panthers concluded the quarter on a 7-0 run. Salisbury was led by Hayden Wooldridge with 21 points. Eight different Panthers landed in the scoring column. Head coach Kenny Wyatt said it was good to see balanced scoring throughout the lineup.

The Panthers have now won nine straight to improve to 9-2 on the season. Cairo falls to 6-5. The Bearcats were led by Logan Head with 25 points. Despite the defeat, coach Nic Zenker said Head and his teammates battled hard in the championship tilt.

In the girls’ championship game, Meadville remained undefeated by topping South Shelby 49-37. The Lady Eagles led for all but the early minutes of the game and had an answer for each potential momentum swing.

Austin Ward with the call. Meadville made just four field goals in the second half but went 12-for-15 from the free throw line. Korrie Holcer led the offense with 17 points while Madison Carvajal and Mallory Dennis had 12. Coach Steve Carvajal…

The South Shelby boys nearly completed a massive comeback in the third-place game but fell to Glasgow 67-61. The Yellowjackets led by 19 midway through the third before South closed the quarter on a 22-8 run and got the deficit down to two in the fourth but never tied or grabbed the lead. Jackson Meyer provided a crucial fourth quarter bucket.

Jordan Fuemmeler and Edris Hamilton sparked Glasgow with 25 and 19 respectively. Coach Mick Cropp said it was a productive week.

Cairo and Salisbury also opened the day’s action with the Lady Cats defeating Salisbury 57-40 in the girls’ third-place game. Cairo opened the game on an 8-0 run and never looked back in the victory. Jersey Bailey led the Lady Cats with twelve points, while Avery Martin and Macie Harman chipped in eleven apiece. Head coach Brian Winkler said scoring depth continues to be a strength.

The win improves the Lady Cats to 10-1 for the season. Salisbury cut a 14-point halftime deficit in half early in the fourth quarter, but Cairo went 12-16 from the free throw line in the final frame to close the game out. The Lady Panthers were led by Tori Ricketts with 18 points while Julia Sloan added eleven.

The Lady Panthers dip to 5-6 with the loss.