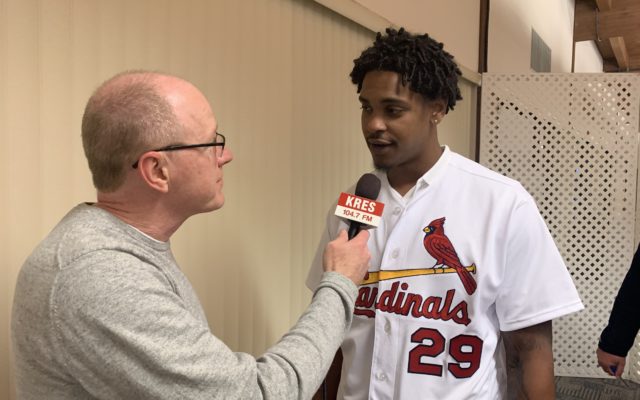 St. Louis Cardinals pitcher Alex Reyes has missed the majority of the past three seasons due to injuries to his right elbow, right lat muscle, left pinkie finger and right pectoral area. The club’s number one prospect for four consecutive seasons (2016-19) is ready to take another shot. At a Cardinals Caravan stop in Quincy, Reyes was asked if he has any restrictions heading into spring training….

Reyes explained how he has remained positive through the adversity….

Reyes was happy for the success of the team last season but admitted he wasn’t a great spectator….

Reyes made the 2019 Opening Day roster and pitched in four games out of the St. Louis bullpen before his season ended.

Outfielder Marcell Ozuna will be an Atlanta Brave this season. Ozuna signed a one-year, $18 million deal with the Braves Tuesday. He spent the last two seasons with the St Louis Cardinals and batted .262 with 52 home runs and 177 RBI. Ozuna began his career with the Miami Marlins for five seasons where he was a two-time All Star and won a Gold Glove in 2017.

Another former Cardinal is headed to the Hall of Fame. Larry Walker made it in his final year of eligibility, along with Yankee shortstop Derek Jeter, who was one vote short of unanimous. Walker played most of his career with the Expos and Colorado Rockies. He played for the Cardinals 2004-2005.

Jeter and Walker will be inducted on July 26th at the Hall in Cooperstown, New York. They’ll join by St. Louis Cardinals catcher Ted Simmons and former players’ association head Marvin Miller, who were voted in last month by the Hall’s Modern Era Committee.