Re Gets Game-winner in a Truman Sweep of Maryville 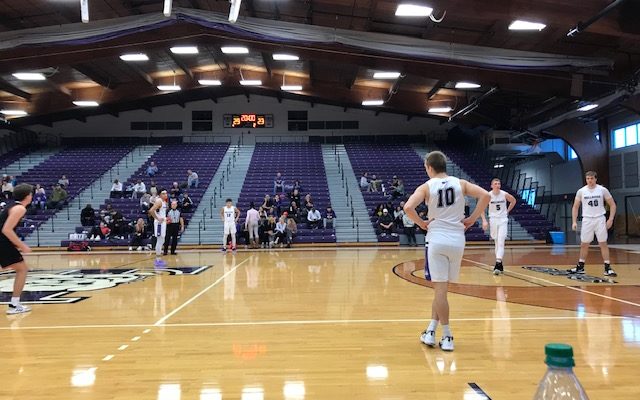 The Truman State women came up with some late game magic to stay undefeated in conference play and the men made it a sweep of Maryville this afternoon (Saturday) at Pershing Arena.

In the women’s game, Maddie Re scored a career-high 17 including the game-winner with one second left to lift the Bulldogs to a 78-77 victory. Mary Barton’s driving lay-up with 2.9 seconds left gave the Saints a 77-76 lead. Truman called a timeout to advance into the front court…..

Brad Boyer with call on Superstation KRES and centralmoinfo.com. Barton’s desperation three at the buzzer missed everything and the Bulldogs moved to 5-0 in the Great Lakes Valley Conference. Coach Theo Dean described the last play design….

Re finished her memorable game with ten rebounds for her fifth double-double of the season. Sloane Totta and Katie Jaseckas both chipped in 16 points. Jaseckas, who came into the game with one three-pointer on the season, hit three in the fourth quarter and scored 11 in the final frame. The Bulldogs won their fourth in a row to improve to 9-3.

Barton and Abby Monis both scored 28 points. The Saints drop to 3-2 in the GLVC and 8-4 overall.

The Truman men used a 20-4 run in the second half to pull away from Maryville for a 65-48 victory. The Saints were only down by one when the Bulldogs took off. Back-to-back triples from freshman Sam Nissen jump-started the burst…

Another freshman, Dylan Peeters established a season-high for the second straight game with 12 points. Brodric Thomas led the ‘Dogs with 13. Coach Jeff Horner wanted to focus on holding the Saints to 48 points….

Horner and the Bulldogs improve to 4-1 in the GLVC and 8-5 overall. The Saints got a game-high 15 from Jalen Gant. Maryville is still winless in the conference and 4-8 overall.

The Truman teams continue the homestand by playing Illinois-Springfield on Thursday. You can hear the games on KRES starting at 5:15.