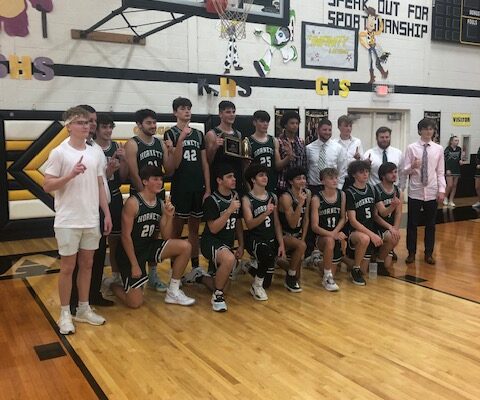 The Hornets won their first Glasgow boys tournament title in 19 years with a 52-43 victory over Randolph County rival Cairo. The Bearcats held a 23-22 lead at the half. Westran took the lead for good with a run to start the second half. With the third quarter coming to a close, the Hornets took advantage of some Bearcat misfortune.

Scott Lunte with the call on Regional Radio. The Hornets collective defense effort then allowed them to close out the game in the fourth quarter according to coach Chris Sander.

6-0 Westran was paced by junior Langden Kitchen’s 18 points. Cairo falls to 3-1 and were led by Ryan Tracy and his 11. The two schools battle again Tuesday.

The girls championship was a high-scoring affair which saw Cairo outduel La Plata 85-69. The Lady Cats outscored Bulldogs 19-7 in the second quarter to grab a seven-point lead at half. Cairo freshman Avery Brumley then took the game over in the third quarter and finished with a game-high 32 points. Fellow freshman Macie Hartman added 26. Cairo coach Brian Winkler said he was proud of his players for stepping up under a big spotlight.

The win marks four Glasgow Tournament titles in five years for Cairo. The Lady Cats are now 4-0 on the young season. La Plata coach Nathan Simler said he likes the way his team is rounding into form amid a tough early schedule.

Olivia and Claire Coy each led La Plata with 19 points.

In the girls third place game, New Franklin hit a pair of free-throws with 10 seconds to spare to defeat the hosts 42-41. The Lady Jackets lost a starter to injury and two others to foul trouble late. After scoring just 11 first half points, Lady Bulldog coach Morgan Vetter liked how New Franklin reset in the second half offensively.

New Franklin’s boys outscored Slater 19-5 in the fourth quarter to hoist the other third place trophy in a 52-42 win. The Bulldogs trailed by as many as twelve early in the second quarter prior to the rally. Clayton Wilmsmeyer was the catalyst of the comeback as he scored a team-high 16 points. New Franklin coach Ross Dobson said an improvement on the defensive end helped with the comeback.

New Franklin improved to 3-2. Jakorie Terrill led Slater with 16 points while Kenyon Minnes added 12. Slater falls to 2-2 with the defeat.

The Glasgow boys used an 11-0 run in the first quarter to open up a double figure lead on their way to a 63-41 victory over Fayette in the boys consolation game. Edris Hamilton led three Yellowjackets in double figures with 22 points. Meanwhile, Glasgow’s man-to-man defense prevented any Falcons from reaching double figures as Glasgow improved to 4-1 on the season matching their win total from last season. Fayette was led by Tyler Bartholomew and Chase Allen-Jackman with nine points apiece. The Falcons fall to 1-2 and will face New Franklin Tuesday in a rematch of the tournament’s opening round.

In the girls consolation game, Fayette defeated Westran 38-21. The Falcons collected their second straight girls consolation title in the Glasgow Tournament, and are now 2-1. Westran is now 1-5. You can hear all 12 coaches postgame interviews below: