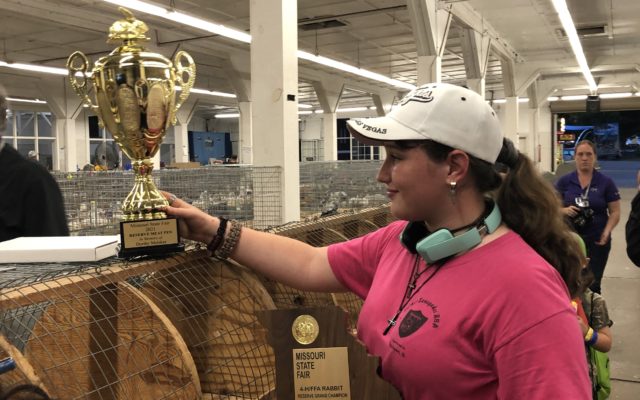 Kaela Sadler of Atlanta looks at the trophy recently awarded to her for exhibiting the Reserve Grand Champion Pen of Meat Rabbits at the 2021 Missouri State Fair. The trophy, presented by the Missouri Rabbit Breeders Association, is in addition to the customary plaque and ribbon from the fair.

Three California rabbits from Macon County claimed Reserve Grand Champion honors Wednesday night at the Missouri State Fair.  The rabbits were exhibited by Kaela Sadler of the Atlanta Home Pioneers 4-H Club.  She says it was difficult to determine which three from her over 200 rabbits would make the trip to Sedalia.

Sadler’s family has worked with rabbits in the past.

However, Sadler notes that she has had to rebuild the colony’s genetic line.  She credits that increased focus for securing her first top-ten finish at the fair.

Kaela Sadler of Atlanta will have her Reserve Grand Champion pen of meat rabbits in the Sale of Champions this Saturday afternoon.  Grand Champion honors went to a pen of New Zealand rabbits exhibited by Carissa Stong of Vernon County.