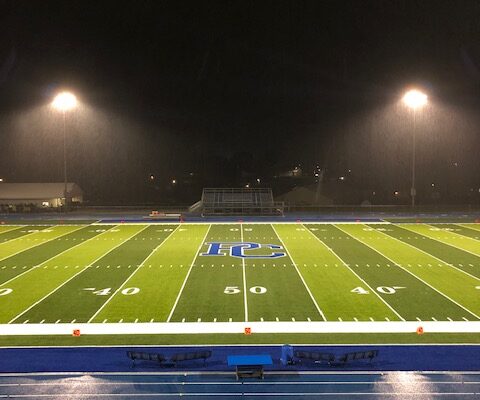 Putnam County scored in every quarter on the way to a 26-0 shutout victory against Rival Milan. The Midgets got the ball first and chewed up over seven minutes of game clock with Blaine Perkins capping the drive off.

Colin Schowe with the call on Superstation KRES and centralmoinfo.com. Coach Adam Huse said the opening drive set the tone for the game.

The Wildcat offense struggled to get going over the course of a cold and rainy night. Milan gained 156 yards of total offense and turned the ball over three times. Coach Mark Cole said they forced some plays in the adverse conditions.

The Wildcats conclude the season 6-5 in Cole’s first year as head coach. Milan graduates seven seniors this year. Cole said the offseason will be key to moving the returning Wildcat’s forward.

Putnam County improves to 9-2 and advances to face Gallatin next week in the district championship.