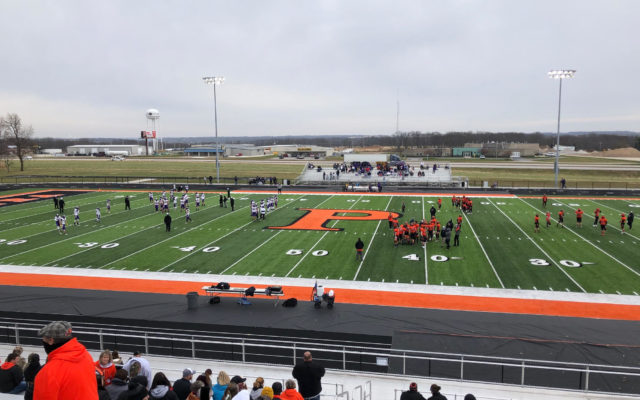 Palmyra football defeated Hallsville 44-30 in the Class 2 state quarterfinals Saturday. The Panthers had three takeaways which led to three scores. Hallsville kept the game to one or two scores for most of the first half, but Palmyra grabbed control of the game as the half came to a close.

Austin Ward with the call of Collin Arch’s 26-yard reception on KRES and centralmoinfo.com. Palmyra added another touchdown to take a 22 point lead. Clarence Cannon Conference Offensive Player of the Year Brody Lehenbauer found Zane Meyers twice to open the game with a 12-0 lead. Hallsville quarterback Tyger Cobb connected with A.J. Austene for a 80-yard score. The two found the end the end zone for a 10-yard touchdown in the second quarter. Panthers Athlete Hayes Miller also scored on a 58-yard jet sweep. Coach Kevin Miles and the Palmyra Panthers are back in the state semifinals for the first time since 2015.

Hallsville running back Harrison Fowler left the game on the second play from scrimmage after fracturing his fibula and tibia. The sophomore entered the game with almost 1,500 yards rushing. Coach Justin Conyers was proud of how his Indians rallied around their first team Tri-County running back.

Top ranked Palmyra improves to 12-0 and travels to St. Pius of Kansas City next weekend in the state semifinals. The game is a rematch of the 2000 Class 2 state title game which marks as Palmyra’s lone state title appearance in program history. You can hear Miles and Conyers’ full postgame interviews below.