Northwest Missouri Drier, But Other Parts Of State Receive Moisture 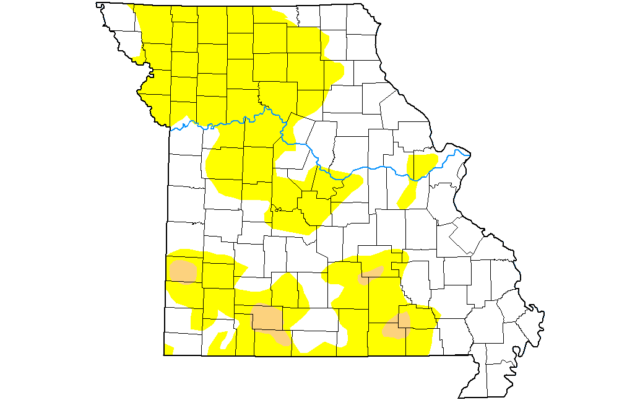 Drought conditions in Missouri as of October 5th, 2021. (The U.S. Drought Monitor is jointly produced by the National Drought Mitigation Center at the University of Nebraska-Lincoln, the United States Department of Agriculture, and the National Oceanic and Atmospheric Administration. Map courtesy of NDMC.)

Several parts of Missouri exited abnormally dry conditions in the past week, but nearly all of northwest Missouri is now classed in the pre-drought stage.  USDA’s weekly update indicates that abnormal dryness has expanded in 14 counties north of the Missouri River, ranging from Nodaway to Knox.  However, more areas returned to normal moisture levels, including Audrain, Montgomery, Ralls, eastern Howard, and most of Boone, Callaway, Cooper and Monroe counties.  Abnormal dryness is no longer present in parts of 10 counties in Southwest Missouri, including Dallas, northern Greene, and western Laclede.

Areas of Missouri that fell into moderate drought last week remain in this stage, totaling 2.3 percent of the state.  43.9 percent of the state is in pre-drought condition, a five-point improvement from last week.  Neighboring states continue to experience worse conditions, with extreme drought developing north of Chicago, as well as pockets of Oklahoma and Nebraska.