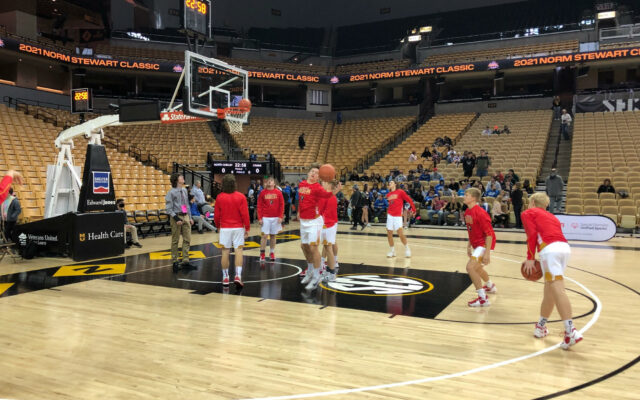 The North Shelby Raiders defeated Crane 62-61 in a Norm Stewart Classic game Friday morning at Mizzou Arena in Columbia. Trailing 17-12 to the eighth ranked team in Class 2 after one quarter, the Raiders went on an 11-2 run and held a five point lead at half. The Pirates pushed back in the third frame by outscoring North Shelby 20-14. Midway through the fourth, the Raiders took a 57-55 lead. Preserving that two point lead, North Shelby called a timeout with just under two minutes to play and set this up.

Scott Lunte with the call of Kyle Smith’s layup on Glory 97 and centralmoinfo.com. Crane cut North Shelby’s four point lead down to one after a series of turnovers. After a series of fouls, North Shelby missed a one-and-one. The Pirates on the final possession missed a left wing three which would have won the game. Raiders coach Landon Daniel couldn’t put into words how meaningful the win was for North Shelby.

North Shelby junior J.D. Rich scored 15 points for the Raiders, Brendyn McDaniel chipped in 12, and seniors Noah Greenwell and Kyle Smith each tallied nine. In addition to playing well in front of the Shelbyville High School alum Norm Stewart, Daniel added this will give North Shelby a big boost of confidence moving forward.