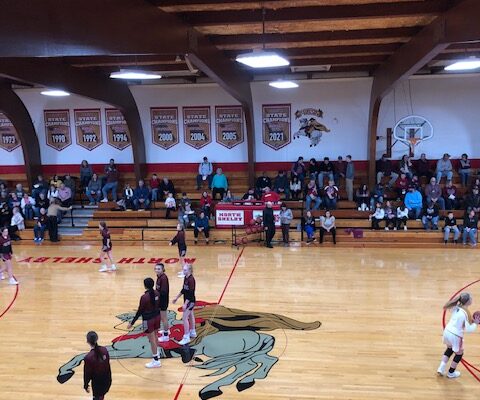 The North Shelby girls used a late rally while the Canton boys utilized lockdown defense in the final quarter as they each notched wins Friday night at North Shelby High School.

The girls’ game featured several scoring runs, but it was North Shelby’s game-ending 16-4 run that put the Lady Raiders over the top for a 60-54 victory. Canton held a 50-48 advantage entering the final quarter. The Lady Raiders quickly took the lead and then extended it thanks to key inbound play.

Colin Schowe with the call on Superstation KRES and centralmoinfo.com. Meg Shively completed the three-point play finishing the night with seven points. Ava Williams led the Lady Raiders with 19 points. She hit a pair of free throws to seal the game late and surpass 1,000 points for her high school career. Natalie Thrasher added 17 while Caroline Lineberger chipped in eleven. North Shelby girls’ coach Chris Parsons said that trio’s leadership showed throughout the game.

Prior to North Shelby’s 16-4 run, Canton used a 12-0 run to grab a 50-44 advantage late in the third quarter. Things went south for the Lady Tigers as their leading scorer Nariah Clay fouled out halfway through the fourth quarter on an offensive foul followed immediately by a technical foul. The Lady Tigers were held to just four points in the final quarter and went 0-4 from the free throw line during that span. Canton girls’ coach Danielle Baker said the game got away from them in the fourth quarter.

The loss snaps a five-game winning streak for the Lady Tigers as they move to 9-6. North Shelby improves to 13-2.

In the boys’ game, Canton’s defense put the clamps down on North Shelby in the fourth quarter for a 49-45 win. The two teams entered the fourth quarter tied 39-39 before the Tigers outscored the Raiders 10-6 in the final frame. Canton boys’ coach Dalton Armontrout said their defense came up big.

Kyle Frazier led the Tigers with 17 points as they improve to 8-7. The Raiders were led by JD Rich with 16 points. Brendyn McDaniel chipped in eleven points. His three-pointer late in the first quarter allowed him to hit 1,000 points for his high school career. North Shelby boys’ coach Cody Stoneburner said their tough schedule will pay off in the long run.