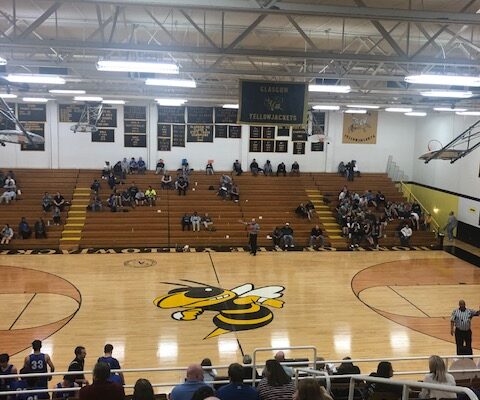 The New Franklin boys and girls basketball teams came away with tightly-contested victories in night one of the 2021 Glasgow Invitational Tournament.

In the opening round of the boys’ tournament, New Franklin held off a late Fayette rally to win 42-40. The Bulldogs built-up a 28-11 lead early in the third quarter, but Fayette rallied from there. Late in the fourth quarter, Fayette’s Theo Owings cut the Bulldog lead to one.

Colin Schowe with the call on Superstation KRES and centralmoinfo.com. Owings finished the game with 13 points to lead Fayette. Tanner Bishop scored the final two of his 13 points at the free throw line to give New Franklin a 42-39 lead. Ben Wells then split a pair of free throws to make it a two-point game late. Fayette’s Chase Allen-Jackman mid-range jumper to tie the game, fell short just before the horn to close the game out. New Franklin boys coach Ross Dobson said it was another game that was a tale of two halves for his team.

Drake Clark joined Bishop in double figures with twelve points for the Bulldogs. New Franklin improves to 2-1 and will face Cairo Wednesday at 7:30 in a semifinal matchup. Fayette was playing without both Dalton Collins and Malakai Graves due to injury. Fayette coach Jon Bishop said a defensive change was key to his team’s second half rally.

Fayette will play the Glasgow JV team in a consolation semifinal Wednesday at 9 pm. In the girls’ game, fourth-seeded New Franklin built-up a 13 point lead in the second quarter and also had to hold on late for a 49-44 win over Marceline. Abby Maupin led the Lady Bulldogs with 15 points while Carly Dorson added twelve. New Franklin girls coach Morgan Vetter said her leaders stepped up at the right time.

The Lady Bulldogs hadn’t scored out of the 30’s in their first two games this season. However, New Franklin used their press to force several Marceline turnovers leading to some easy baskets. Vetter said the press served as a boost for their offense.

Marceline was led by freshman Natalee Pennington with 15 points. New Franklin will face Cairo in a semifinal contest Wednesday at 7:30 pm. Marceline will battle Westran in a consolation semifinal that same night at 4:30 pm.