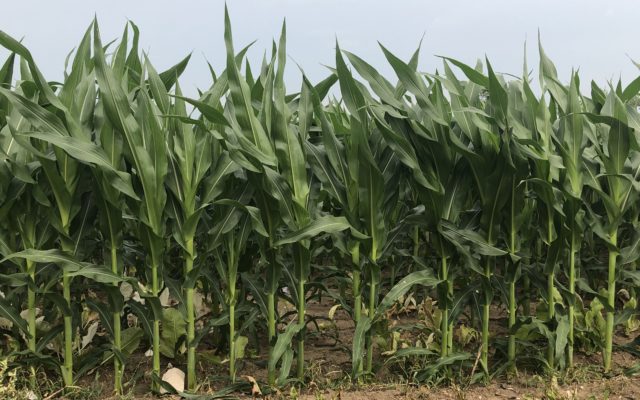 Corn in a field outside Collinsville, Illinois.

Last week’s warmer temperatures helped to speed up crop development across Missouri, and also encouraged farmers to harvest a third of their wheat crop.  USDA’s weekly Crop Progress report issued Tuesday indicated that 34 percent of Missouri’s wheat crop for the year is in the bin as of Sunday, putting the state just behind the five-year average but 11 points ahead of last year’s pace.  59 percent of the remaining crop is rated good to excellent, while 12 percent is listed in poor or very poor condition.  Meanwhile, 97 percent of the corn crop has emerged, two points ahead of average but just behind last year’s mark.  Conditions weakened in the above-average heat, with 70 percent rated good to excellent against six percent poor or very poor.  Soybean planting is now 85 percent complete, in line with the five-year average but still six points behind a year ago.  Three out of five soybeans are in good or excellent shape, while six percent are rated poor or very poor.

Cotton progress in the Bootheel remains well behind pace.  Just six percent of the crop is squaring, compared to 43 percent at this point last year and the five-year average of 24 percent.  62 percent of the crop is in good condition, while 12 percent is rated poor or very poor.  Two-thirds of Missouri rice is considered good to excellent, up two points from last week, while five percent has fallen into poor condition.

An average of 5.8 days were suitable for fieldwork last week.  Temperatures averaged over eight degrees above normal at 82°F, while just 0.19″ was recorded on average around the state.