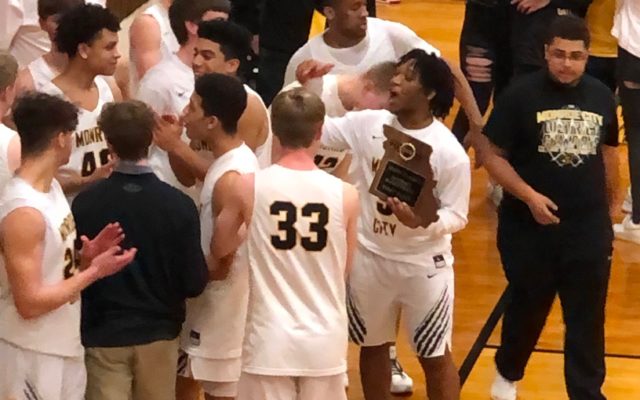 Both the Monroe City boys and Macon girls defeated Palmyra in a Class 3, District 13 championship doubleheader at Palmyra Saturday.

Eric Duick with the call on Glory 97 and centralmoinfo.com. 22-5 Palmyra again trimmed Monroe City’s lead to two, but Stark connected on two free throws at the other end with 18 seconds left. Brock Edris and Monroe City collected four wins opposite rival Palmyra this year.

The Macon Tigerettes captured their first district championship since 2015 with a 58-49 victory over Palmyra. The Lady Panthers went on an 11-0 run in the second quarter to tie the game at 23 at the half. In the third frame, sophomore Shelby Petre started doing damage for the Tigerettes.

Scott Lunte with the call. Petre scored 11 second-half points as part of a game-high 23-point performance. Coach Richard Driscoll was proud of Macon’s toughness down the stretch.

The 22-4 Tigerettes take on Chillicothe in sectionals Wednesday. Palmyra senior Reagan Barnett scored a team-high 12 points as the Lady Panthers season ends 22-4. Hear full postgame interviews with the coaches below: