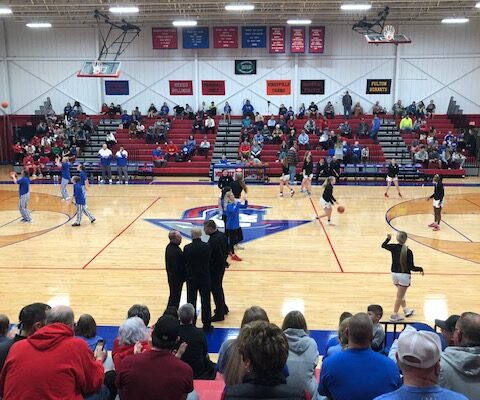 The Moberly boys and girls basketball teams pulled off a thrilling sweep of a varsity doubleheader against Boonville on Thursday night.

In the girls’ game the Lady Spartans never trailed on their way to a 62-50 victory over the defending Class 4 champions. While Moberly used a fast start, Boonville kept them within arms length throughout the contest. After Boonville just missed on a possession to potentially tie the game late, Asa Fanning delivered a key basket.

Colin Schowe with the call on Superstation KRES and centralmoinfo.com. Fanning’s basket started an 11-2 run to close out the game for Moberly. Grace Billington led all scorers with 21 points, while Kennedy Messer added 17 for the Lady Spartans. Fanning concluded the contest with nine. Defensively Moberly held Addison Brownfield to 17 points and shut her out in the fourth quarter. Moberly girls coach Tony Vestal discussed the key to slowing down Brownfield.

Moberly improves to 5-2 and snaps a streak of 13 consecutive Boonville victories in the overall series. Emma West added 14 points, while Zoe Davis chipped in 13 for Boonville, who falls to 6-2 on the season. Boonville girls coach Jaryt Hunziker said his team battled until the end.

In the boys’ contest Moberly rallied from a 50-40 third quarter deficit to defeat Boonville 76-70. After being held to just seven points in the first half, Jaisten Payne keyed the second half comeback for the Spartans.

Moberly improves to 2-3 and will host Versailles tonight in a game that can be heard on KWIX beginning at 7:15 pm. Boonville dropped their second straight to fall to 3-5. The Pirates were led by Luke Green with 24 points, while Dawan Lomax added 16. You can hear full postgame interviews with the coaches online at centralmoinfo.com