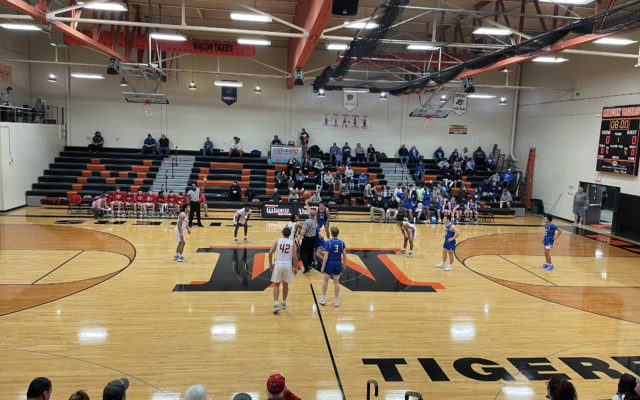 The Moberly Spartans and Kirksville Tigers will play for the Macon Boys Tournament title Saturday night after picking up thrilling semifinal victories Thursday.

The fifth seeded Spartans upset top seeded Mexico 77-71 in the first semifinal. The third ranked team in Class 5 took a 18-14 lead in the first quarter. Moberly answered in a thunderous way to start the second quarter.

Scott Lunte with the call of the Martez Nabors dunk, and the Jaisten Payne and-one on KRES and centralmoinfo.com. The sequence sparked the Spartans to an 11-1 run. Moberly held a 33-24 advantage at the half, then extended that lead with a 7-2 run to start the third. After holding a 16 point lead at the end of the third quarter, Mexico outscored Moberly 32-22 in the fourth. The Bulldogs closed the margin to three late in the game, but a runner by Payne followed by five made free-throws by Dominic Stoneking sealed the win for 7-7 Moberly. Coach Cord Hagedorn now knows the Spartans have the ability to compete with the best.

Payne tallied a game-high 28 points, and Stoneking followed up his career-high 15 points with 13. Bulldogs coach Darren Pappas said Mexico never got into a rhythm.

Juniors Daeye Miller and Isaiah Reams provided 18 points each as Mexico falls to 11-1.

In the other semifinal, tenth ranked Kirksville outlasted Centralia 62-54.

The Panthers led 17-12 at the end of the first quarter, but were outscored 35-22 in the second and third quarters, which proved to be the difference in the game. Kirksville used a third quarter surge to create its lead. Tigers’ head coach Tyler Martin said the offense was more purposeful in the middle quarters.

Centralia’s Noah Brooks hit a buzzer-beater to give the Panthers a one point lead going into halftime. Kirksville came out on a 6-0 run to start the third quarter and kept Centralia scoreless in the final 90 seconds.

Isaac Danielson had a game-high 21 points, while Keaton Anderson had 14 and Noah Copeland had 11 to pace the Tigers. Centralia had two players in double figures, with Jackson Wells scoring 13 and Kile Chitwood getting 11.

Kirksville moves to 10-1 while Centralia drops to 6-6.

Centralia and Mexico play for third place Friday. You can hear full postgame interviews below: