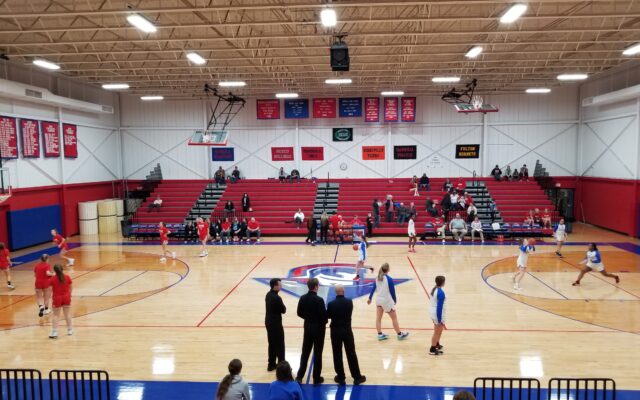 The Harrisburg boys defeated Moberly 52-41 despite an inspired effort by the Spartans. Moberly was playing without both leading scorer Jaisten Payne and leading rebounder Martez Nabors due to illness. Moberly led in the opening minutes and Harrisburg held a 26-25 lead at halftime. Harrisburg began creating distance in the third quarter but Moberly never allowed the Bulldogs to grab a definitive lead.

Austin Ward with the call on KRES and centralmoinfo.com. Harrisburg took advantage for good by scoring the final five points of the third quarter to take a six-point lead into the final frame. Brayden Ott led the charge with 16 points. Jace Carr had 10. Coach Kyle Fisher…

Derieus Wallace scored a game-high 17 points for the Spartans. Demarcus Gilson had 10 and Zayne Montgomery was right behind with nine. Coach Cord Hagedorn was very pleased.

The Moberly girls notched their fourth straight win with a 52-36 victory. The Lady Spartans opened the game with a 13-3 lead before Harrisburg rattled off an 8-0 run. Moberly led by five at halftime but took control by scoring the first 11 points of the third quarter. Coach Tony Vestal said it started with changing up the defense.

Moberly’s Grace Billington and Harrisburg’s Carli Ellis tied for a game-high 20 points. Moberly is now 7-2 and Harrisburg is 5-4.