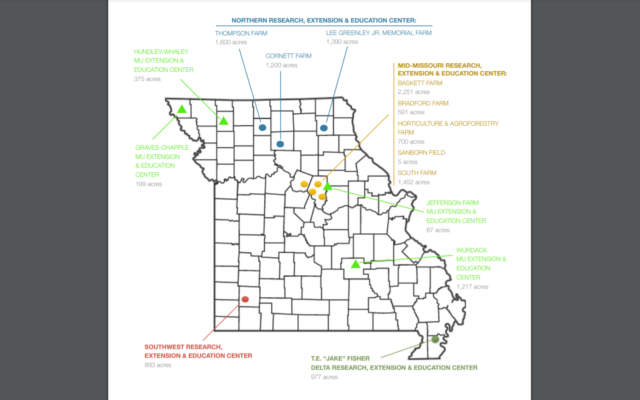 The University of Missouri has proposed the realignment of 14 ag experiment stations into four regional centers that will remain with CAFNR, while four will become education centers operated by MU Extension.

Wednesday’s field day at the Greenley Research Center marked more than just the return of in-person tours at the farm.  Under a proposed restructuring plan, the University of Missouri ag experiment station outside Novelty will become one of three farms grouped into the Northern Research, Extension And Education Center.  Doctor Christopher Daubert, dean of the College of Agriculture, Food and Natural Resources…

Daubert says three other regional centers will be based in Columbia, Mount Vernon, and Portageville, while MU Extension will assume operation of centers in Albany, Cook Station, and Rock Port.  He explains that land-grant universities including Mizzou are dealing with increased costs to operate their research farms.

The proposed restructuring was detailed in a report released last month by CAFNR following 18 months of consultations with ag leaders around the state including Missouri Farm Bureau and state commodity groups.  According to the report, Mizzou could save an estimated $820,000 per year as staff and administrative positions are reduced or spread among the new centers.  Eight farms, including the Bertha Brown Farm outside Macon, Foremost Dairy west of Columbia and Timmons Farm outside Wheeling, would either be leased, made self-sustainable, or divested.

An earlier version of this story incorrectly identified the new regional center including Greenley Research Center as the “Northeast Research, Extension and Education Center.”