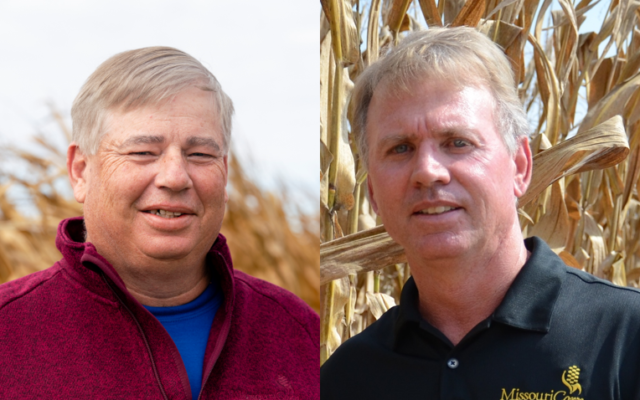 Jay Schutte of Benton City (left) is the 2021-22 Missouri Corn Growers Association president. Stepping into his previous role as chairman of the Missouri Corn Merchandising Council is Clint Stephens of Advance (right).

Jay Schutte of Audrain County has moved across the hall from chairman of the merchandising council to president of the growers association.  The Benton City farmer has previously held multiple roles on both boards.  He’s also served as chairman of the Ethanol Advisory Team with the National Corn Growers Association, as well as on the Risk Management and Transportation Action Team, and on the U.S. Grains Council’s Asia Advisory Team.  Schutte succeeds Jay Fischer of Jefferson City as MCGA president.

The new chairman of the merchandising council hails from Stoddard County.  Clint Stephens of Advance has stepped into the role, having previously served as treasurer of the council, as well as vice president and secretary/treasurer of the MCGA.  Stephens is also on the National Corn Growers Association’s Production Technology Access Action Team.

Officers were elected during board meetings held in August in Branson.  Brent Hoerr of Palmyra is the new MCGA vice president, while Matt Lambert of Laclede is the new secretary/treasurer.  On the merchandising council, Brian Lehman of Versailles is now vice president, while Patrick Seyer of Oran becomes the secretary and Dylan Rosier of Mound City has assumed the post of treasurer.  The MCMC also welcomed two new board members, Brice Fischer of Rich Hill and Brandon Thiel of Marshall.