McKnight Returns And The Bulldogs Complete A Sweep Of The Miners 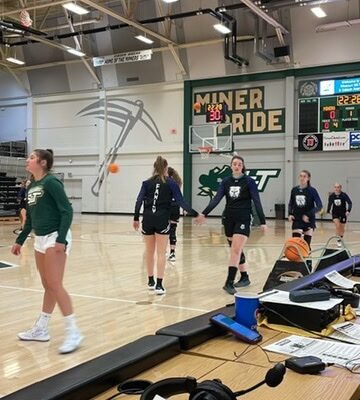 Both Truman teams had to withstand late comebacks by the Miners to complete a sweep at Missouri S&T Thursday night.

All-American Cade McKnight returned to the lineup after a three-game absence and scored all 17 of his points in the second half in the Bulldogs 81-72 victory. Truman led by 15 points with 12:43 left, but the Miners had whittled the deficit down to four. At 68-64, McKnight delivered a big play….

Brad Boyer with the call on Superstation KRES and centralmoinfo.com. The Bulldogs would score seven in a row and finished off the win by hitting their free throws. Coach Jeff Horner’s 21st ranked Bulldogs hit 23-of-27 free throws and outscored S&T by 13 at the line….

Masen Miller led Truman in scoring with 23. The Bulldogs improve to 11-3 overall and 5-1 in the GLVC. The ‘Dogs will next play Monday at home against Drury. Pregame coverage will begin at 2:45 on KRES. Julien Smith led all scorers with 26, including 22 in the second half. The Miners drop to 6-8 and 2-5 in the conference.

The Truman women won their sixth in a row beating Missouri S&T 71-63. The Bulldogs led by 17 after three quarters, but the Miners scored the first 13 points of the fourth. Freshman Gracie Stugart hit a big shot to stop the run….

It was Stugart’s first Bulldog three-pointer….

Katey Klucking led Truman in scoring with 14. The Bulldogs improve to 9-5 and 5-1 in the GLVC. The Truman women will play at Maryville on Saturday afternoon. We will have the broadcast on KRES starting at 12:45. Marta Durk led all scorers with 18. S&T drops to 4-8 and 1-5 in league play. You can hear interviews with the Truman coaches with this story at centralmoinfo.com.