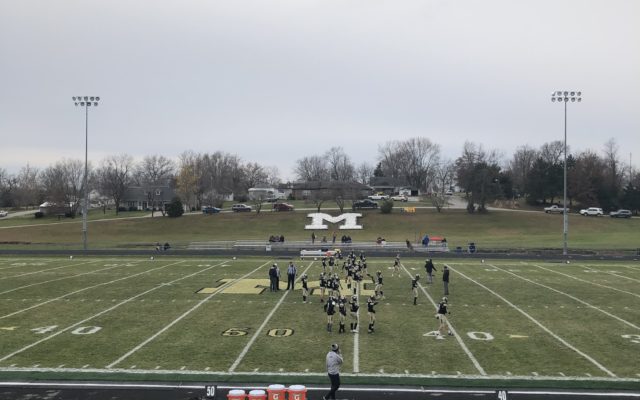 Marceline’s season ended with a 13-7 state quarterfinal loss versus Adrian Saturday. The Tigers reached the Blackhawks’ 10 yard line and operated a fourth and two play with five seconds left.

Colin Schowe with the call on 99.9 The Captain and centralmoinfo.com. Marceline’s possession started on its 22 yard line with 1:08 and zero timeouts. Tigers head coach Mark Ross analyzed the final play.

Aside from the final possession, Adrian’s defense dominated much of the afternoon. Stallo finished with an unofficial 188 yards while First Team All-Conference running back Hunter Nelson added 27 yards on the ground. Ross evaluated the offensive difficulties.

The teams entered the half tied 7-7 after Stallo found Wyatt Molloy for a 24-yard touchdown with 43 seconds left in the second quarter. In the middle of the third, Adrian lobbed a jump ball into the end zone on fourth down. Junior Colton Bass’ pass fell incomplete, but the officials called defensive pass interference to extend the drive. Bass then scored on a one-yard sneak. Ross shared the explanation he received on the controversial call.

Marceline returns all of its starters in 2021. Hear a full postgame interview with Tigers head coach Mark Ross below.