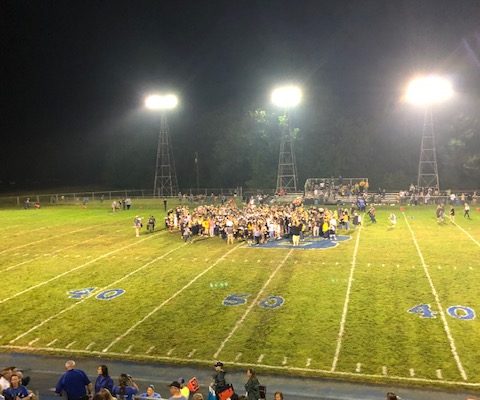 After a 0-0 deadlock in a rain-soaked first half, the Marceline Tigers came to life in the second half to down Brookfield 20-0 in the 86th Bell Game. The Tigers scored early in the third quarter thanks to a short field created by a Jace Bixenman interception. Senior running back Hunter Nelson then put the Tigers on the board on a third and goal play from five yards out. The touchdown and subsequent extra point gave Marceline a 7-0 lead. The Tigers added a 57-yard touchdown run by Bixenman and a 30-yard touchdown pass by Jacob Stallo to Sam Gilman in the fourth quarter to cap the scoring. Marceline coach Mark Ross said there is still room for improvement on offense.

The Tigers recovered three fumbles and intercepted a pass, while losing only one fumble in the victory. With a roster featuring 18 seniors, Ross said it’s gratifying for them to enjoy a final victory in the Bell Game.

Brookfield’s offense was held to 178 total yards on the night. Brookfield coach Cory Luke said their fumble on the final drive of the first half was a momentum killer.

While Marceline returned all of its starters from a season ago, Brookfield features just 10 total seniors. Luke said he still saw some positives from his young team.

Brookfield falls to 1-1 and will open Clarence Cannon Conference play at Centralia next week. Marceline improves to 2-0 and will head to Illinois to face Quincy Norte Dame in week three. You can hear full interviews with both coaches online at centralmoinfo.com