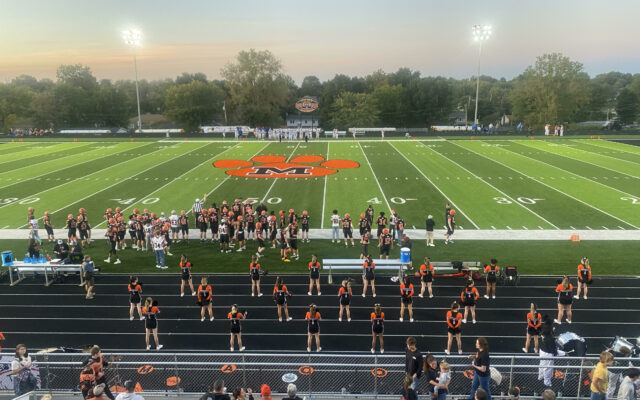 The Macon Tigers used a fake punt run for a touchdown to pull away from the Brookfield Bulldogs 53-20 tonight.

Macon recovered a fumble on the opening kickoff and scored a few plays later on an Alex Moots 9-yard touchdown run. Brookfield responded on a 51-yard touchdown run by Colton Parn before Macon broke off a big play one minute later.

Brandon Monty with the call on KTCM and centralmoinfo.com. Macon would score three more times to end the first half on a second Moots touchdown run and two rushing touchdowns from Mykel Linear. Brookfield cut a 35-8 third quarter to 35-20 and had a chance to get the ball back on a punt before the Tigers ran a fake.

Macon unofficially rushed for 317 yards as a team. Alex Moots earned his first career varsity start and rushed for 50 yards and two scores in the first half. Vanatta said Moots did a good job stepping up.

Mykel Linear accounted for 264 total yards of offense and three scores. Brookfield pulled the game to two scores on third quarter passing touchdowns to Kendrell Carter and Gambal Staddie. Brookfield coach Cory Luke said his team’s six turnovers were too much to overcome.

Colton Parn had three total touchdowns and accounted for 245 total yards. Macon travels to face South Shelby next week while Brookfield falls to 2-4 and hosts Monroe City next week.