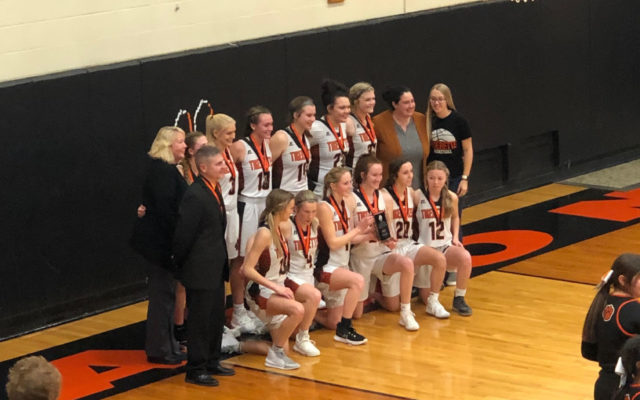 The host Tigerettes won their second straight home tournament title 63-40 over Mexico. Macon wasted no time getting out to a 7-0 lead.

Scott Lunte with the calls on KRES and centralmoinfo.com. The Tigerettes took a 21-9 lead at the end of the quarter, but three starters were forced to the bench with foul trouble. Mexico closed the deficit to six at the half, but would never get any closer once the three starters returned. Macon coach Richard Driscoll was proud of the Tigerettes’ second half performance.

Macon’s Lexi Miller tallied a game-high 24 points. Mexico junior Mya Miller had a team-high 10. The Tigerettes are now 15-1, while Mexico drops to 10-3.

Kirksville defeated Moberly 85-53 in the boys game. The Tigers led the Spartans 19-17 after the first quarter, but Kirksville stretched its advantage to 10 at half and 15 after three. Kirksville head coach Tyler Martin analyzed the program’s first Macon Tournament championship since 2007.

Eric Duick with the call on Glory 97 and centralmoinfo.com. Isaac Nobles’ basket resulted in a 53-51 Macon edge. 10-5 Harrisburg missed a potential game-winning jumper with five seconds left and a half-court heave at the buzzer. Dale Devenport’s 9-6 Tigers won a trophy game in each of their three tournaments this season.

In the girls consolation game. Kirksville controlled Moberly 78-44. Nick Totta’s Lady Tigers hit 15 threes in the game, including 10 in the first half. The second year coach wasn’t surprised with the offensive outburst.

The 78 points surpasses the season-high point total by 20 which came against Hannibal last week. Kirksville improves to 6-6 while Moberly falls to 6-8.

The Moberly teams visit Mexico for a doubleheader Tuesday with pregame at 6:15pm on KRES. Both Macon squads meet South Shelby Tuesday. Kirksville’s teams host Palmyra Monday. The Harrisburg boys welcome Hallsville for the inaugural Harrisburg Tournament Monday. Hear full postgame interviews with all of the head coaches below: