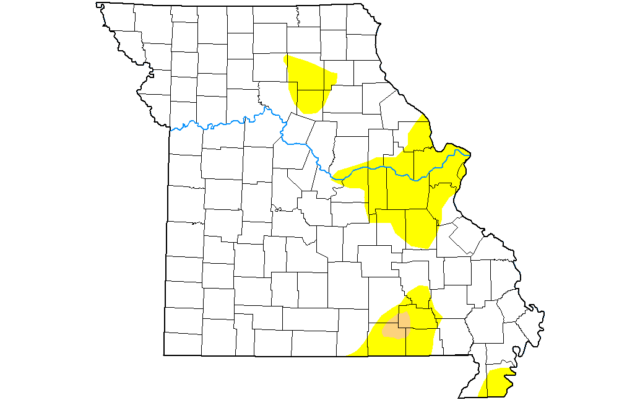 Drought conditions in Missouri as of November 23rd, 2021. (The U.S. Drought Monitor is jointly produced by the National Drought Mitigation Center at the University of Nebraska-Lincoln, the United States Department of Agriculture, and the National Oceanic and Atmospheric Administration. Map courtesy of NDMC.)

A majority of Lincoln County, as well as areas surrounding Clarksville, entered abnormal dryness in the past week.  That’s the only change of note in this week’s USDA Drought Monitor for Missouri, which now has just over 14 percent of the state in some stage of dryness.  That continues to include the corners of Carter, Oregon, Ripley, and Shannon counties in moderate drought.  This also marks the 11th week of abnormally dry conditions reported across a majority of Macon and Randolph counties, as well portions of Callaway, Cole and Osage counties.