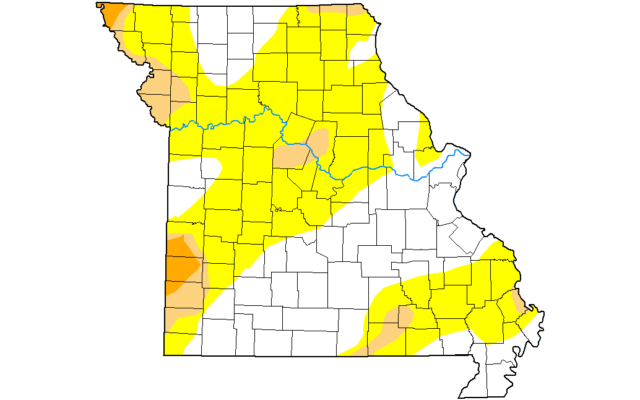 Drought conditions in Missouri as of January 10th 2023. (The U.S. Drought Monitor is jointly produced by the National Drought Mitigation Center at the University of Nebraska-Lincoln, the United States Department of Agriculture, and the National Oceanic and Atmospheric Administration. Map courtesy of NDMC.)

Fewer areas of Northern Missouri are in drought this week, but abnormal dryness has returned to several counties in Western Missouri.  The weekly US Drought Monitor indicates the end of moderate drought conditions for Chariton, Cole, Johnson, Macon, Monroe, Randolph, Saline, Shelby, southern Boone, and most of Howard counties, as these areas were upgraded to abnormal dryness.  This drought patch is now contained to central Boone, northernmost Moniteau, the southern tip of Howard, and a majority of Cooper counties.  Drought conditions elsewhere in the state were unchanged from a week ago.

Moderate drought retreated from most of the region, but actually spread into southwestern Cooper County, as a result of drier conditions south of Interstate 70.  Abnormal dryness has returned to all or part of 17 counties, including the Lake of the Ozarks and Truman Lake.  Percentagewise, almost half of Missouri is in abnormal dryness, while 7.3 percent of the state is in moderate drought.  Areas of Missouri in severe drought are unchanged at 1.6 percent.