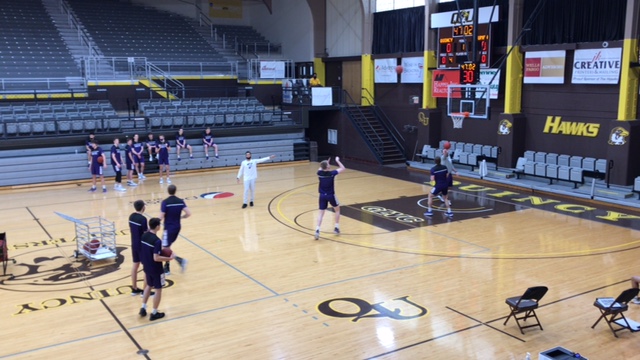 A late push lifted the 6th ranked Truman State men to a 74-68 victory at Quincy Saturday afternoon for their 9th straight win. The Bulldogs trailed by seven with seven minutes left, but outscored the Hawks 19-6 down the stretch. Cade McKnight scored seven of his 14 points in a personal run that erased a Quincy 62-55 lead. Freshman Masen Miller broke out of a 1-for-18 shooting slump from three by connecting on two big triples late in the game….

Brad Boyer with the call on Superstation KRES and centralmoinfo.com. Miller also added two free throws for the final margin. It was the second straight game that the Bulldogs struggled to win against sub-.500 teams on the road trip. Coach Jeff Horner said his team made the key plays in winning time….

Dylan Peeters paced Truman with 16 and Hunter Strait chipped in a dozen. The Bulldogs improve to 14-1 and have won 19-of-20 going back to the end of last season. Truman is scheduled to have a makeup game at Southern Indiana on Monday afternoon at 3:00 in a matchup of the two hottest teams in the GLVC. The Screaming Eagles have won seven in a row. (The forecast is not favorable with heavy snow predicted in Evansville)

Quincy star Tanner Stuckman led all scorers with 24 points. The Hawks drop to 5-13.