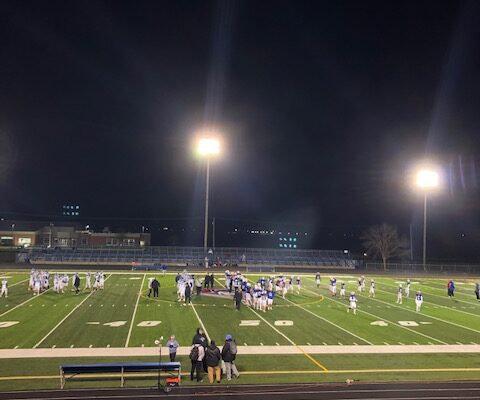 A pair of fourth quarter touchdowns from Boonville quarterback Colby Caton helped lift Boonville to a 28-13 win over Moberly in the Class 3 District 5 Championship game Friday night. The Spartans appeared to seize momentum late in the third quarter when Collin Huffman hooked up with Gabe Flood for a 46-yard scoring strike. However, the Pirates blocked the extra point to maintain a one-point lead. With 7:52 remaining in the game Caton found Jackson Johns on a 16-yard strike to make it 21-13. With 4:30 remaining in the game Moberly punted the ball back to the Pirates. One play later Caton put the game away.

Steven Findley Jr. with the call on Superstation KRES and centralmoinfo.com. Caton finished the night with 128 yards rushing and 126 yards passing, while accounting for all four Pirate touchdowns. Boonville coach Greg Hough Huff said tonight was just a sample of what Caton can do at quarterback.

The win gives Boonville their first district title since 2011 and improves the Pirates to 8-4 on the season. They will face Reeds Spring next week in a Class 3 Quarterfinal game. Hough said his team has little to lose moving forward.

The two teams exchanged touchdowns in the second quarter to enter halftime tied at 7-7. A fumble on Moberly’s opening drive of the second half set the tone as Boonville controlled the time-of-possession battle the rest of the way. Moberly coach Cody McDowell said the game came down to one common denominator.

The Spartan offense was held to 70 yards of offense in the second half. Moberly graduates eleven seniors from this year’s team. McDowell commended the work his senior class put in over the past four years.

Moberly concludes the season with a record of 5-6.