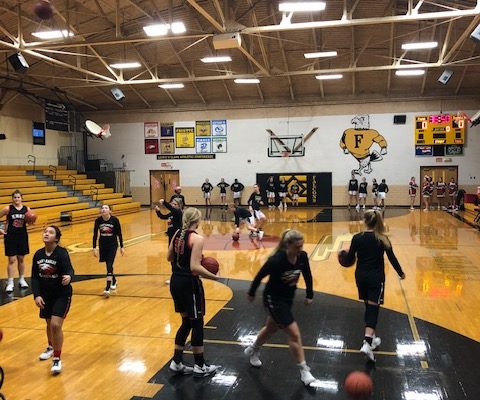 In the girls game Fayette used hot shooting from Abbey Conrow to jump out to an 18-11 lead at the end of the first quarter. However, Knox County outscored the Lady Falcons 27-4 in the middle quarters on their way to a 54-33 victory. The Lady Eagles dominated in the paint courtesy of Kylee Woods and Riley Strange. Woods led the Lady Eagles with 20 points while Strange added 17. Knox County girls coach James Dent said Woods is turning her game on.

Knox County improves to 5-14 overall and 2-2 in Lewis and Clark Conference play. Meanwhile, Fayette dropped to 4-12 overall and 0-3 in conference play. Abbey Conrow scored 24 of the Lady Falcons 33 points in the game. Fayette girls coach Valerie Foland gave her thoughts on her team’s performance after the first quarter.

In the boys game, Fayette jumped out to a 13-11 lead at the end of the first quarter. However, Knox County slowly imposed their will over the next three quarters to win 56-36. Conner Hayes scored 11 of his 13 points in the second half, which included this key shot in the third quarter.

Colin Schowe with the call on Superstation KRES and centralmoinfo.com. The win was Knox County’s third straight and ran their overall record to 10-10. Knox County was led in the game by freshman guard Rylan Roberts with 14 points. Knox County boys coach Zach Short said Roberts is turning into quite a shooter for them.

Kyle Schleeter was the lone Falcon in double figures with 13 points. Fayette boys coach Jon Bishop said he was disappointed in his team’s effort.

The Falcons drop to 8-8 overall and 1-2 in conference play.