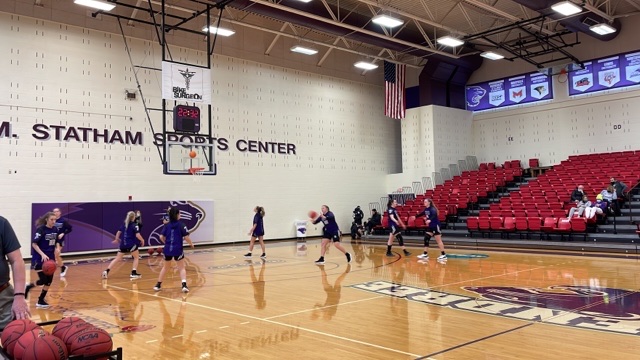 A Columbia native scored a career-high in leading the Truman women to victory, and McKendree upset the 16th ranked Bulldog men, in a split at Lebanon, Illinois today (Sat.).

Senior Katey Klucking pumped in 28 points in a 79-55 win over the Bearcats. Sophomore Claire Rake had a breakthrough game with 21 points, including six three-pointers. She hit back-to-back triples as part of a 25-12 third quarter…

Brad Boyer with the call on Superstation KRES and centralmoinfo.com. The Bulldogs led by just five at halftime before the big third frame. Coach Theo Dean said Klucking’s attacking style led to her big day….

Ellie Weltha had a double-double with 14 rebounds and 10 points. It was the fifth win in a row for Truman to improve to 8-5 overall and 4-1 in the GLVC. The Bearcats drop to 1-10.

The Bulldog men pulled out a one-point win at Quincy on Tuesday, but came up a point short at McKendree losing 74-73. With 10 seconds left, the Bearcats had a three-point lead and a foul to give. They executed strategy using both factors to send the ‘Dogs to the line. Truman ended up with two trips to the line. With less than a second on the clock, Elijah Hazekamp tried to miss a back-end free throw, but ended up sinking both and McKendree inbounded to complete the upset.

The Bearcats led by 14 with 3:45 left in the first half, but the ‘Dogs countered with the last 11 points going into the locker room….

Truman used an 18-7 stretch to take a 61-57 lead. The ‘Cats scored the next six and never trailed, extending the lead back to seven at 74-67. Coach Jeff Horner said they had too many defensive breakdowns….

Truman again played without All-American Cade McKnight. Masen Miller led five in double figures with 15. The Bulldogs’ six-game winning streak ended with their first loss in conference play, The ‘Dogs drop to 10-3 and 4-1. Bryson Bultman had 18 and Brendon Gooch 17 for McKendree. The Bearcats improve to 6-4 and 2-4 in the GLVC.

The Truman teams next play at Missouri S&T on Thursday. You can hear the games on KRES starting at 5:15.