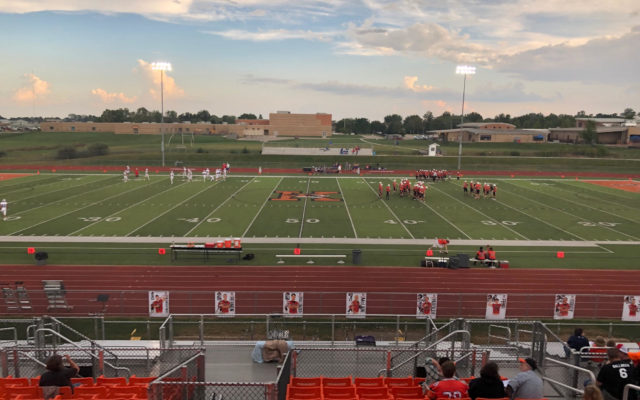 The Kirksville Tigers used a balanced offensive attack to defeat the Moberly Spartans 63-22 Friday. Kirksville scored first in the first minute of the game with a three-yard touchdown run by Isaac Danielson. Moberly responded with an 18-yard touchdown pass from Collin Huffman to Gage St. Clair. On the ensuing kickoff, Randon Baumgartner began an explosive night.

Scott Lunte with the call on KWIX and centralmoinfo.com. Baumgartner finished the night with two reception touchdowns, over 150 yards receiving and an interception. Kirksville head coach Kevin Krietemeyer was impressed with the senior’s versatility.

After the kickoff return, Kirksville recovered a squib kick and quickly added another score. 50 seconds later, Landon Yardley rushed into the end zone from 23 yards out to make it 21-6 Kirksville with 1:37 left in the first quarter. Krietemeyer was happy with the balance of his offense…

The Spartans forced a safety early in the second quarter and got a touchdown run from Derieus Wallace with 1:33 left in the first half. Hunter Boots rounded out the scoring late with a 37-yard run. Moberly head coach Cody McDowell said the Spartans need to continue eliminating the same mistakes; however, he did like the progression Boots and St. Clair showed.

The Spartans will look for their first win next week on Homecoming when they host Fulton. Kirksville moves to 2-2 with the win and will look for its third win in a row at Marshall next Friday.

You can hear full postgame interviews from Krietemeyer and McDowell below: