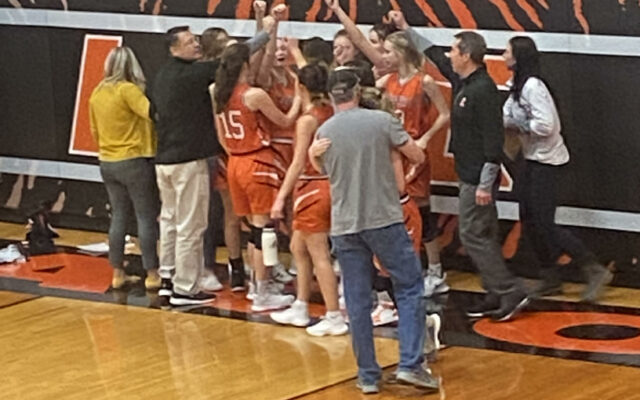 Kirksville defeated host Macon 57-44 in the girls championship. The Tigerettes held an 8-6 advantage after the first quarter before the Kirksville offense found its rhythm in the second. Three triples from Channing Totta provided a spark for the Lady Tigers.

Brandon Monty with the calls on 99.9 The Captain and centralmoinfo.com. Kirksville outscored the Tigerettes 19-6 in the second quarter to take a 25-14 lead into the half. The win gives Kirksville it’s 10th consecutive victory and first Macon Tournament championship since 2012. Lady Tigers head coach Nick Totta discussed the significance of the win.

Three different scorers were in double figures for the Lady Tigers, with Totta leading the way with 16 points. The loss ends a two-year streak of Macon Tournament championships for the Tigerettes. Head coach Richard Driscoll says turnovers and allowing too many 3-pointers were the deciding factors in the loss.

Lexi Miller led the Tigerettes with 26 points. Kirksville is now 14-2 and takes on Hannibal Tuesday. Macon falls to 12-3 with the loss and hosts South Shelby on Tuesday.

Junior guard Jordan Shelton handed 14-0 Mexico a permanent lead with a pair of free throws early in the fourth. Shelton scored a team-high 19, and three Bulldog teammates added 12-plus points apiece. Kirksville head coach Tyler Martin explained what changed in the second half.

The Centralia girls outlasted Mexico 53-43 in the first contest. The Lady Panthers led after each quarter, including 22-21 at half. Centralia head coach Becca Schemmer reacted to the victory.