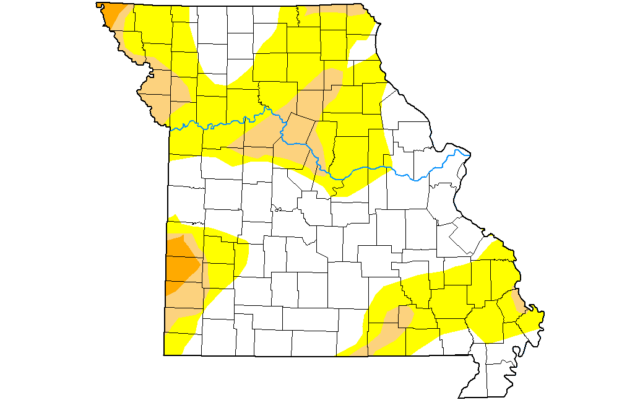 Drought conditions in Missouri as of January 3rd 2023. (The U.S. Drought Monitor is jointly produced by the National Drought Mitigation Center at the University of Nebraska-Lincoln, the United States Department of Agriculture, and the National Oceanic and Atmospheric Administration. Map courtesy of NDMC.)

Ample precipitation leading into the New Year allowed several portions of Northern Missouri, as well as the Southeast, to leave moderate drought and even abnormal dryness altogether.  The first US Drought Monitor update for 2023 shows the end of drought conditions for a wide reach of northern Missouri, stretching from the Kansas City metro northeast into the southern halves of Clark, Schuyler and Scotland counties.  Moderate drought also came to an end in most of Southeast Missouri, while eastern Scott County was upgraded from severe to moderate drought.  Abnormal dryness retreated from all or part of 38 counties.

The only two patches of severe drought remain in Atchison County in the northwest corner of the state, along with southwest Missouri’s Barton, southern Vernon, and northwestern Jasper counties.  They account for 1.6 percent of Missouri, while another 10.9 percent are in moderate drought.  37.2 percent of the state remains in abnormal dryness.