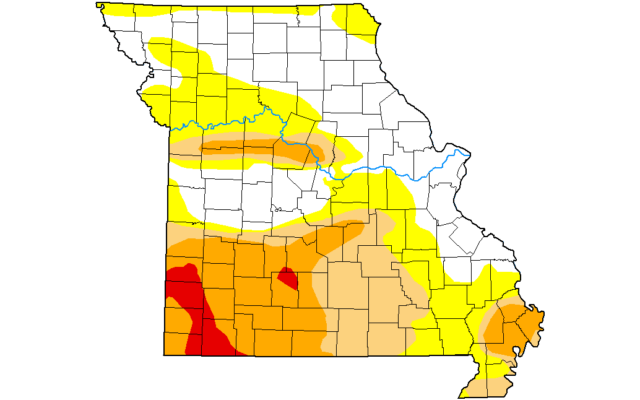 Drought conditions in Missouri as of August 9th, 2022. (The U.S. Drought Monitor is jointly produced by the National Drought Mitigation Center at the University of Nebraska-Lincoln, the United States Department of Agriculture, and the National Oceanic and Atmospheric Administration. Map courtesy of NDMC.)

Significant rainfall in drought-stricken Southwest Missouri has allowed much of the region to improve from extreme drought conditions, but areas of Northern Missouri are starting to slide into abnormally dry conditions.  The weekly U.S. Drought Monitor indicates extreme drought continues to cover 3.2 percent of Missouri, roughly a fourth of last week’s level.  The larger patch stretches from southern and central Barton County, through a majority of Barry and Jasper counties, and into eastern McDonald and Newton, southwestern Lawrence, and southern Stone counties.  A small area of extreme drought also continues to impact areas around Conway and Niangua.  Most areas of Southern Missouri saw a one-step improvement, with Ripley County jumping from severe drought to abnormally dry.  Eight counties in eastern Missouri are no longer impacted by drought, but continue to experience post-drought conditions.

Toward Central Missouri, minor improvements were noted just north of the Lake of the Ozarks, as Benton and Morgan counties exited abnormal dryness.  Also returning to normal was most of Montgomery, Moniteau, Warren, central Miller, eastern Callaway, and western Cole counties, including Jefferson City.  However, the most severe stretch of drought, anchored along I-70 from Bates City to Columbia, remains intact, and portions of central Bates County entered the pre-drought stage.

North of the Missouri River, increased heat has resulted in areas along the Iowa border entering abnormal dryness, including the entirety of Clark County.  Pre-drought conditions are also blanketing the rest of Howard and Saline counties and all of Caldwell, Carroll, Clay, Platte and Ray counties.  Abnormal dryness is also reported in a majority of Andrew, Chariton, Clinton, Daviess and DeKalb counties.  35.7 percent of Missouri is considered to have normal or surplus moisture, down four-point-nine points from a week ago.  However, a ten-point drop was reported in areas suffering from some form of drought, now at 37.8 percent.