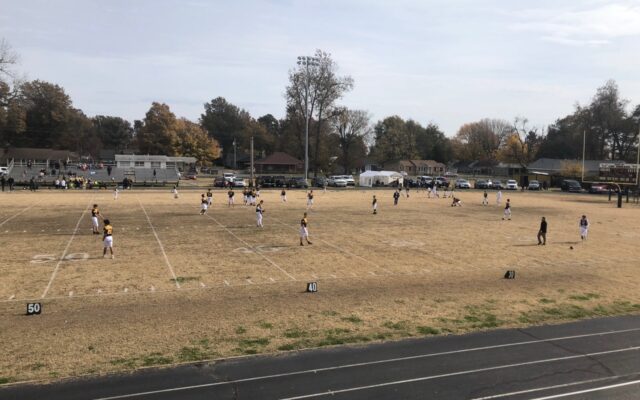 The Hayti Indians scored 26 unanswered second half points to defeat Monroe City 26-22 in the Class 1 Quarterfinals Saturday. With Monroe City up 22-20 late in the fourth quarter and Hayti out of timeouts, the Panthers dropped a pass on third down which would have kneeled out the game. The Panthers punted the ball away with just over two minutes to go to the Hayti offense. Indians quarterback Tray’Von Thomas connected with wide receiver Elijah Burnett for a 40 yard gain. Two plays later, the Indians gained their first lead.

Scott Lunte with the call on Glory 97 and centralmoinfo.com. The Panthers marched all the way down to the Hayti 34-yard line with 10 seconds to go. Hayti’s defense then came up with the big play.

Burnett had a second interception in the third quarter, rushed for a one yard score, and also caught two touchdown passes. The Panthers defense had three takeaways in the first half which led to their three scores. The first score came off quarterback Kyle Hays’ first completion.

Colin Schowe with the call. Joshua Talton rushed in a three-yard score and Ceaton Pennewell scored on a 13-yard run for Monroe City’s points. Coach David Kirby explained what went well in the first half.

As for how Hayti turned the game around second half…

Kirby graduates 12 seniors. The group went 36-11 over their four years and brought the Panthers their first district title since the 2017 state title run.

Monroe City finishes the season 11-2. 12-0 Hayti heads to Marceline for the Class 1 semifinal next weekend on KIRK. You can hear Kirby’s full postgame interview below: