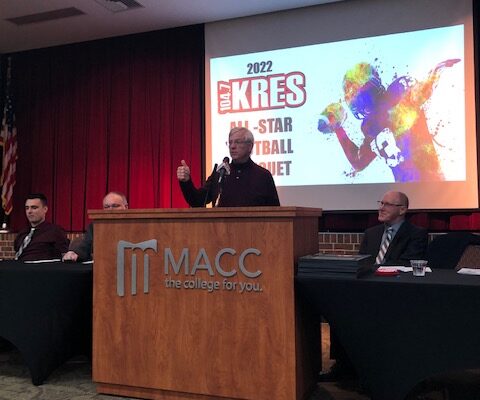 Earlier this week Harrisburg head football coach Steve Hopkins announced his retirement. Hopkins had spent the past four years leading the Bulldogs but his coaching career spanned a total of 46 years. Hopkins explains the reason behind his decision to retire.

The Bulldogs compiled a record of 29-15 during Hopkins’ tenure. His run culminated with Harrisburg winning their first-ever Lewis & Clark Conference title in the 2022 season. Hopkins says there’s one particular aspect of coaching he’ll remember the most.

Hopkins started his career as an assistant coach at Warrensburg in 1977. In total, he coached at nine different schools across Missouri and Kansas. Hopkins says the bookends of his career standout.

While Hopkins has retired from coaching, he remains on staff as a history teacher at Heritage Academy in Columbia. Hopkins says his retirement plans from coaching will involve a focus on family.

Hopkins was honored with a lifetime achievement award at this year’s KRES All-Star Banquet. Austin Darwent represented Harrisburg on the KRES All-Star Team.