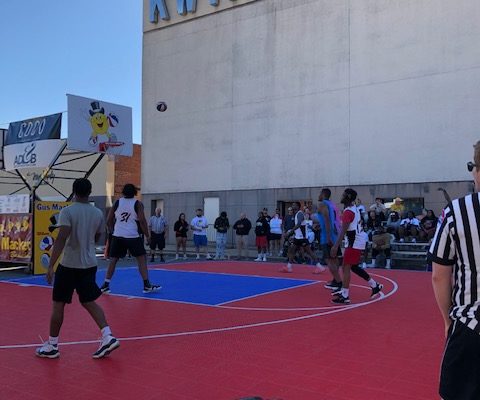 For the first time in its history the Gus Macker Tournament visited Moberly. Approximately 100 teams descended on downtown Moberly for the 3-on-3 basketball tournament Saturday and Sunday. The event ran in conjunction with Junk Junction and the JROTC Car Show, which also occupied downtown Moberly on Saturday. Tournament founder Scott McNeal (A.K.A. Gus Macker) said the other events and the time of year made Moberly a perfect location for the tournament.

McNeal adds there were a couple of other elements that made Moberly the ideal location.

McNeal and other members of the Gus Macker Tournament staff participated in the Moberly Homecoming Parade Friday night. The tournament has traveled the country since 1987. Event Manager for the tournament, Tony Wysinger, said he’s hopeful the tournament will return to Moberly next year.

Wysinger also ran a slam dunk contest Saturday afternoon that was won by Da’Jon Weston, a 2018 graduate of Battle High School in Columbia. The tournament featured divisions for kids ten and under, up to adult divisions for those 19 and older.