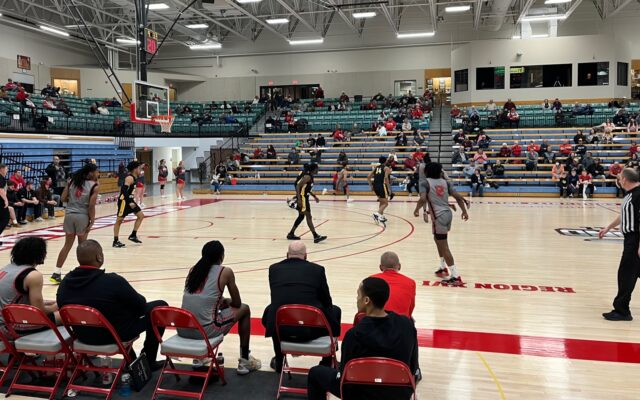 The Moberly Greyhounds overcame a ten-point first half deficit in a 65-53 win over Three Rivers Wednesday night at Fitzsimmons-John Arena. Down 20-10, the Hounds went on an eight-nothing run, then pulled ahead for good just moments later.

J.B. Connoley with the call on KWIX and centralmoinfo.com. Jaheim Tanksley finished with a game-high 28. Coach Pat Smith gave credit to his players for how hard they played.

In the early game, the Lady Greyhounds beat the Missouri Valley JV 106-62. Six Lady Hounds finished in double digits, led by McKenna Eddings and Jenny Ntambwe with 19 each, and Bukky Akinsola with 15.

Moberly only led 25-21 after 1, but outscored the Vikings 31-6 in the second to blow the game open. Coach Hana Haden said the defensive focus was not giving up cuts.

Moberly is now 17-2, and will host Crowder Saturday night at 5. The men will play West Plains at 7.

Find our postgame interviews with both coaches with this story at centralmoinfo.com.