Freshmen Help Lead Truman to a Sweep of the Prairie Stars 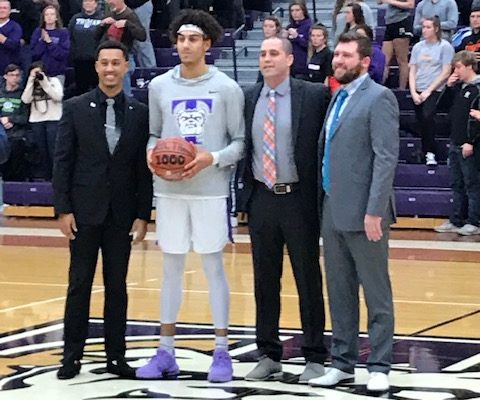 A pair of freshmen helped the Truman basketball teams sweep Illinois-Springfield Thursday night at Pershing Arena. In the women’s game, Hannah Belanger scored 29 points to lead the Bulldogs to a comeback 81-75 victory to move to 6-0 in the Great Lakes Valley Conference. The Bulldogs had to overcome their largest halftime deficit of 10 points. Belanger put the pressure on the Prairie Stars at the start of the third quarter…..

Brad Boyer with the call on KRES and centralmoinfo.com. While the freshman Belanger kept Truman in the game, senior Sloane Totta closed the deal. She scored 19 of her 23 points after halftime and finally got the Bulldogs over the hump in the fourth quarter….

The Bulldogs outscored UIS 21-10 in the last quarter. It was the fifth win in a row for the Truman women, who remain in a tie with top ranked Drury and Lewis for first place in the GLVC. The Bulldogs play Lewis on Saturday. Truman is 10-3 overall.

In the men’s game, freshman Dylan Peeters had his first double-double with 10 points and 11 rebounds to help the Bulldogs to a 74-61 win over Illinois-Springfield….

Peeters was also in the middle of a first half run that saw Truman outscore the Prairie Stars 23-5. Bulldogs coach Jeff Horner….

Hunter Strait led Truman with 19, Cade McKnight chipped in 17 and Brodric Thomas added 16. The Bulldogs improve to 5-1 in the GLVC and 9-5 overall. UIS drops to 9-5 and 2-4 in league play. The Truman teams will try to sweep the four-game homestand when Lewis visits Saturday. You can hear the games on KRES starting at 12:45.