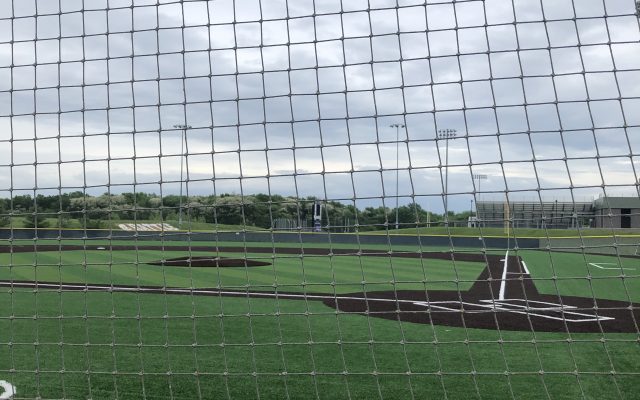 The third-seeded Harrisburg Bulldogs started fast and hung on late as they upset top-seeded Salisbury 5-3 in the Class 2 District 12 Championship game. Harrisburg grabbed a 2-0 lead in the first inning on RBI singles by Austin Darwent and Trevor Smoot. Then in the second inning, Anthony Alicea delivered the decisive blow with two runners on base and two outs.

Colin Schowe with the call on Superstation KRES and centralmoinfo.com. Salisbury got back into the game with single runs in the third and sixth innings. The Panthers also scored one run in the seventh inning and had their top hitter Eli Wekenborg at the plate with the tying run at second and two outs. However, reliever Logan Fritts was able to get Wekenborg to ground out to end the game. Harrisburg coach Chris Ackman said the fast start was key.

While Salisbury committed five errors in the game while Harrisburg played error-free baseball throughout the game. Ackman said this was the best defensive performance of the season.

Along with getting the winning hit, Alicea also got the win on the mound holding the vaunted Salisbury offense to just one run on two hits over five innings while striking out eight. Fritts got his third save of the season over the final two innings. Salisbury coach Nate King said the final at-bat from Wekenborg was what they were looking for with the game on the line.

Wekenborg came into the game hitting .583 for the season but was just 1-4 at the plate in the title game. Salisbury concludes their season with a record at 17-3 and graduate only one senior from this year’s team. King said the future is bright for the program.

Harrisburg moves on to the Sectional round with a record of 10-12 and a four-game winning streak. The Bulldogs will visit Putnam County Monday.