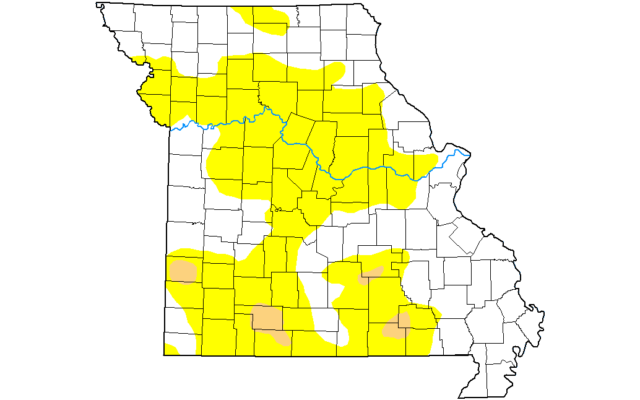 Drought conditions in Missouri as of September 28th, 2021. (The U.S. Drought Monitor is jointly produced by the National Drought Mitigation Center at the University of Nebraska-Lincoln, the United States Department of Agriculture, and the National Oceanic and Atmospheric Administration. Map courtesy of NDMC.)

Four patches of moderate drought have appeared across southern Missouri in the past week, while abnormal dryness now blankets nearly half the state.  USDA’s weekly Drought Monitor indicates that moderate drought now covers a majority of Barton County in west central Missouri, Christian and northeastern Taney counties south of Springfield, and two patches impacting the corners of Carter, Dent, Oregon, Ripley, Shannon and Texas counties in south central Missouri.  Abnormal dryness in the past week has increased in 26 counties, including western Saint Charles County, Kansas City’s northland, and areas south of the Lake of the Ozarks.  Areas of Monroe, Ralls, and Randolph counties also re-entered pre-drought conditions in the past week.  In total, 2.3 percent of the state is in moderate drought, while another 48.8 percent is in pre-drought condition.

A previous version of this story incorrectly identified Vernon County as being in moderate drought.