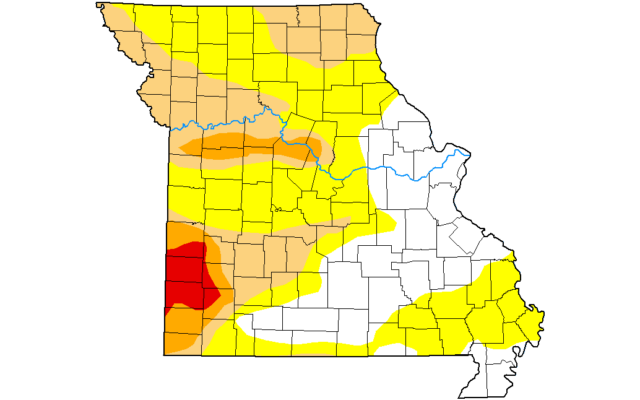 Drought conditions in Missouri as of September 20th, 2022. (The U.S. Drought Monitor is jointly produced by the National Drought Mitigation Center at the University of Nebraska-Lincoln, the United States Department of Agriculture, and the National Oceanic and Atmospheric Administration. Map courtesy of NDMC.)

Warmer than usual temperatures in the past week have led to three expanded areas of drought, including two in Northern Missouri.  The weekly US Drought Monitor update indicates moderate drought now covering a majority of seven counties in Northeast Missouri, along with northeastern Knox, northern Macon, and eastern Sullivan counties.  The severe drought patch that has lined Interstate 70 for much of the summer has ballooned to include southeastern Jackson, southeastern Howard, and northernmost Moniteau counties, while the surrounding area of moderate drought has surged northwest into areas that last week fell into abnormal dryness.  With the exception of Montgomery and Pike counties and points east, all areas north of the Missouri River are in drought or abnormal dryness.  There was one sign of improvement, as Clark County is no longer in severe drought.

In total, 31.6 percent of Missouri is in drought, including 2.66 percent in extreme drought.  Another 41.5 percent are in abnormal dryness.