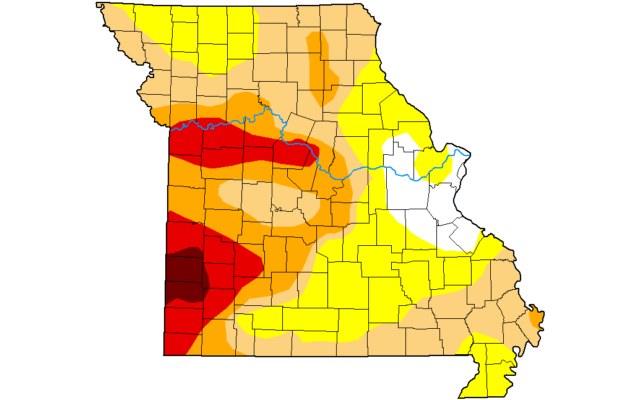 Drought conditions in Missouri as of October 4th, 2022. (The U.S. Drought Monitor is jointly produced by the National Drought Mitigation Center at the University of Nebraska-Lincoln, the United States Department of Agriculture, and the National Oceanic and Atmospheric Administration. Map courtesy of NDMC.)

Another week without significant rainfall sent much of Missouri into a worse stage of drought conditions.  This week’s US Drought Monitor has 12.5 percent of Missouri in extreme or exceptional drought, an almost eight-point increase from last week.  Interstate 70 west from Columbia is now engulfed in extreme drought, covering all of Jackson County and the near-entirety of Lafayette and Cooper counties.  Severe drought has created a ring around the Lake of the Ozarks and parts of Truman Lake, with a majority of Benton, Camden, Henry, Morgan and Miller counties still holding onto moderate drought.  A patch of severe drought has also appeared along the North Fork of the Salt River, impacting portions of Adair, Knox, Macon, Monroe, Randolph and Shelby counties.  Northern Mississippi County also entered the second stage of drought conditions in the past week.

Abnormal dryness has returned to areas of Southwest Missouri that had previously enjoyed a reprieve from the summer’s first blast of drought.  This results in all or parts of 11 counties, plus Saint Louis City, still retaining adequate moisture.  In total, 62.9 percent of Missouri is in some stage of drought, including areas of Barton and Jasper counties that remain in exceptional or the worst stage of drought.  Another 31 percent of the state is in abnormal dryness.