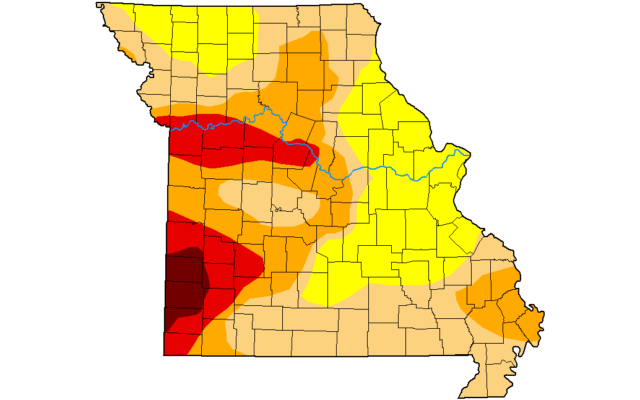 Drought conditions in Missouri as of October 11th, 2022. (The U.S. Drought Monitor is jointly produced by the National Drought Mitigation Center at the University of Nebraska-Lincoln, the United States Department of Agriculture, and the National Oceanic and Atmospheric Administration. Map courtesy of NDMC.)

Another week without significant rainfall resulted in several areas of Missouri entering another level of drought.  The weekly Drought Monitor showed the expansion of exceptional drought south of Joplin into western Newton County.  Extreme drought seeped north into more of the Kansas City metro, along with southern Ray and southwestern-most Carroll counties.  Severe drought now stretches along the Chariton River as far north as Adair County, also covering southeastern Sullivan, eastern Linn, and almost all of Chariton and Randolph counties. Howard and northwest Boone counties also entered the second level of drought in the past week, as did all or part of seven counties in southeast Missouri surrounding Cape Girardeau and Sikeston.  Moderate drought made a return to areas stretching from northern Stone to western Perry counties, along with the Bootheel.