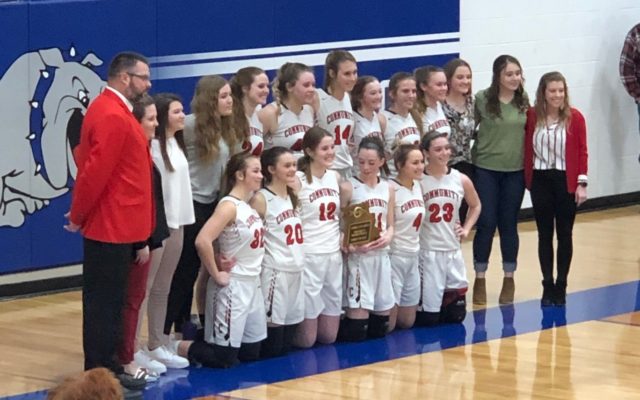 Already falling twice to the Lady Trojans in conference games this season, Cairo took a different approach in trying to slowing down Community. The Lady Cats played a half court style game and played keep away from the top ranked Lady Trojans. After a 5-0 first quarter for Community, senior Natalie Thomas drew a handful of takeaways, and also pitched in offensively.

Scott Lunte with the call on Glory 97 and centralmoinfo.com. The Lady Cats took only one attempt from the field in the opening quarter. Community coach Bob Curtis admitted the first quarter was tough.

Community extended the lead to 20-9 at the half, and then were up by 20 by the end of the third quarter. Lady Cat coach Brian Winkler knew they were in for a tall task ahead of what he believes is the team to beat in Class 1.

The 26-1 Lady Trojans were guided by seniors Delaney Bowers, Deann Brooks, and Thomas’ nine points. Community faces the Otterville/Chamois winner in sectionals Tuesday night at Harrisburg. Cairo caps off the season 18-10 as junior Shaylee Chrisman led the team in scoring with seven. Hear Curtis and Winkler’s full postgame interviews below: