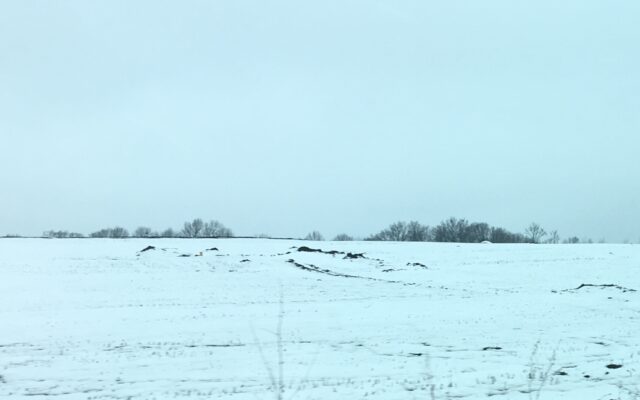 Snowfall on a field in Lafayette County, Mo.

Temperatures averaging below freezing last week caused pasture conditions to reverse course, while winter wheat weathered the week well.  USDA’s weekly Crop Progress report places three out of five Missouri pastures in poor or very poor condition, a five-point increase from a week ago.  Just 14 percent of fields are in good shape, down three points.  However, improvements were evident in the state’s winter wheat crop, with 58 percent in good or excellent condition against eight percent poor or very poor.  97 percent of the crop has been planted as of Sunday, with 83 percent emerged.

Corn harvest is now at 96 percent complete, with soybean harvest at 95 percent and the Bootheel’s cotton harvest at 97 percent.  Just over five days were suitable for fieldwork.  Temperatures on average across Missouri were at 29.3°F, 15.5 degrees below normal.  0.24″ of precipitation fell around the state on average, 0.63″ below normal.  Adequate stock water supplies were reported for just over half of Missouri farmers, while 45 percent reported having enough hay on hand.  57 percent of topsoil and 42 percent of subsoil have enough moisture in the ground.