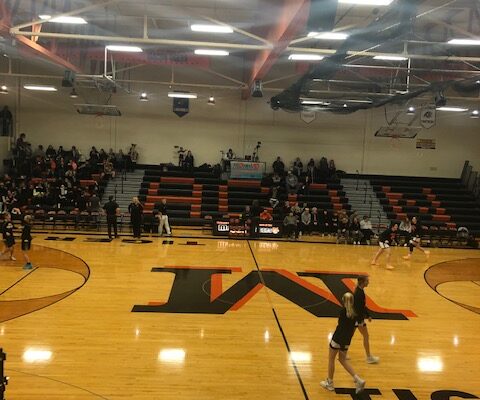 The Centralia boys’ and Harrisburg girls’ used large scoring runs to each blowout Marceline in the consolation games of the Macon Tournament Friday night.

The Centralia Panthers used a scoring flurry from late in the first quarter to help carry them to a 63-41 win over Marceline. A quick 4-0 run from Grant Erisman provided the spark for Centralia.

Colin Schowe with the call on Superstation KRES and centralmoinfo.com. Erisman’s 4-0 run was part of a 9-0 run to boost Centralia to a 21-9 lead at the end of the first quarter. The Panthers carried that momentum to a 36-15 halftime lead and never looked back. Centralia coach Scott Humphrey said his team was ready to go from the start.

Erisman led the Panthers with 23 points while Logan Rosenfelder added twelve and Noah Brooks chipped in ten points. Marceline was led by Wyatt Molloy with 16 points, while Sam Gillman added 13. Molloy and Gillman combined for all 15 of the Tigers’ points in the first half. Marceline boys coach Mike Severa said it was a disappointing night for his team.

In the girls’ game, Harrisburg went on a 14-0 run in the third quarter to blow their game open with Marceline on their way to a 63-38 win. Nine of Harrisburg’s ten players that saw the floor found the score sheet in the game. Harrisburg coach Ryan Richardson said he was thrilled with his team’s effort on the offensive end.

Harrisburg improves to 9-8 while Marceline falls to 6-9. We’ll have the third-place and championship games from the Macon Tournament Saturday beginning with pregame coverage at 12:50 on 99.9 The Captain.